Indiana won Friday and Saturday nights and was in line to pick up a sweep on Sunday before the finale slipped away.

1. The pitching was tremendous for (almost) the entire weekend. Early in the season, the two biggest concerns with pitching should be pitch count and control. Neither were an issue for the Hoosiers this weekend.

Scott Effross and Christian Morris were both fairly efficient in their starts, with Effross going 6 IP and Morris logging 5.2 IP. That was about all you could expect for opening weekend given a pitch count that appeared to be around 80. Jake Kelzer was less efficient on Sunday, only going 4.1 IP, but was still effective and kept the Hoosiers in the game until he handed the game to the bullpen, which is what you want out of your 3rd starter.

Control wasn't a problem either. It wasn't until the 3rd inning on Sunday, 21.2 innings into the season (Saturday went to extras), that the Indiana staff walked its first batter. They only walked two on the weekend and beaned a couple more, but limited the self-inflicted wounds that can haunt pitchers at this point in the season.

All in all, the pitching was tremendous. Holding Stanford to 9 runs on the weekend was a stellar start to the season. And all nine Indiana pitchers had good moments. And for the most part, it was the defense behind the pitching that did the Hoosiers in yesterday.

If you take one thing away from the pitching this weekend, let it be confidence. At this point, there's no reason to think that the pitching won't lead the Hoosiers to a lot of wins.

2. Several mistakes in a couple facets left quite a bit to be desired. Let's start with the mistakes that are somewhat forgivable: A ball dropping in the outfield after grazing of the glove of a twisting, turning Casey Rodrigue, a couple tailor-made double plays that the timing prevented from being turned, and a couple errant throws from the outfield.

Now, the mistakes that aren't so forgivable and point to two potential problem areas. First, the baserunning. Chris Lemonis has said that one of the differences between this year's squad and those from years past will be the aggressiveness on the base paths. And I'm all for that, especially given that this team isn't going to hit a buncha long balls. (Other than the Rodrigue home run on Friday, most runs were scraped out by capitalizing on Stanford errors, sacrifices, and infield hits.)

But if aggressive baserunning ins't accompanied by smart baserunning, the purpose is defeated. Two egregious instances of aggressive but dumb baserunning stand out. First, on Saturday night in the 9th inning of a tie game, Craig Dedelow stood on 3rd base with one out. Austin Cangelosi hit a fly to right that was deep enough for Dedelow to tag, score, and take the lead. But when the Cardinal right fielder hauled it in, Dedelow was still retreating to 3rd because he got halfway down the baseline before realizing he needed to tag up. Now, I won't second-guess the baseball IQ of any of these guys, but any Little League coach worth a nickel teaches his kids on 3rd to stay on or near the base on a fly ball to the outfield.

Then, on Sunday, trailing by one in the 6th inning, Casey Rodrigue led off the inning and got on 1st. And against a left-handed pitcher, who had already tried to pick him off two or three times, he got overly greedy and jumped way too far out on his leadoff and was out by a mile on another pickoff attempt.

Luckily, neither of the baserunning blunders blew the games, but they easily could have. And that brings us to the first problem of the weekend: Is this team tailored to be aggressive on the bases? They don't appear to have too many burners in the lineup, and having not run in the past, you have to wonder whether this team is mentally prepared to operate that way on the bases. One thing is certain, though--if they keep making these mistakes, it will cost them games in the future, and this team can't afford to give games away. 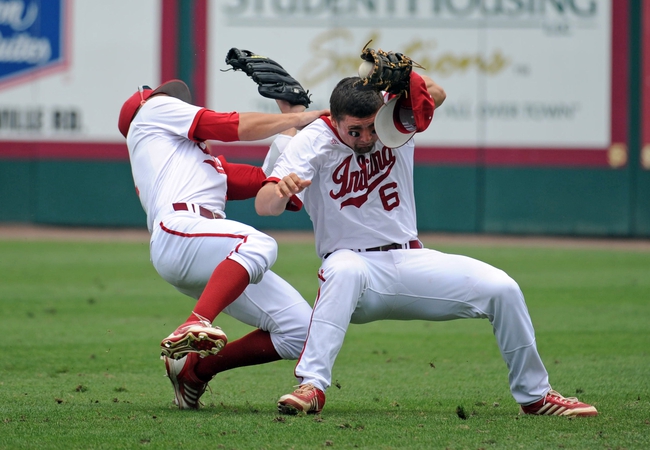 The second potential problem area is 3rd base. I will give Brian Wilhite the same benefit of the doubt that I would have given struggling pitchers if there had been any this opening weekend, but to put it plainly, he was awful in the field this weekend. Friday, Dedelow saved him an error by making a miraculous snag and swipe at first. But Wilhite couldn't save himself later that night as he booted a slow roller to allow a Cardinal runner. Saturday, Lemonis went with Isaiah Pasteur, but restored Wilhite to the lineup on Sunday, when his struggles continued, this time in the form of a throwing error on a grounder that should have ended the 8th. The game-winning run scored on the play.

Even though he was only charged with one error, the fielding of Wilhite was troubling. I think he would tell you the same thing. But like I said, I'll give him the benefit of the doubt, given that it's February. But a weak glove or inaccurate arm at the hot corner isn't something this team, which, again, can't afford to give games away, can endure. Hopefully Wilhite gets it together next weekend in Greenville, S.C., but if not, Lemonis may need to take a look at Pasteur or another player to shore up what was glaringly the weakest spot in the defense.

There was nothing wrong with the jersey except for the giant, faded, pink IU logo crookedly placed on the abdomen of the jersey right next to the front number. It didn't just offend me because of the non-traditional placement of the logo or the odd color. It offended me mostly because it was hideous and tacky. I hope it was just a Valentine's Day thing, even though it would be plain weird for a baseball team to celebrate Valentine's Day. Take off that logo, keep the rest of the jersey.