Indiana takes on Maryland in football for the first time since 1935 and this author certainly can't remember any other notable engagements in ANY OTHER SPORT ESPECIALLY BASKETBALL. A lot has changed since then, most notably being that Hitler has been taken care of and teams throw the ball a lot more.

Tickets? From $40 through Indiana's website, and from $27.99 through Stubhub.

We actually played Maryland for the National Cham-

That's great to hear, friend! Winning cures everything (except for actual diseases and other life-threatening ailments) and it seems the big win over Mizzou has helped heal a lot of broken hearts after the Bowling Green game. But Kevin Wilson is not one to rest on his laurels or his failures. In his Monday press conference, he made sure to let everyone know that that the Hoosiers football team was moving on:

"We had to let go of the Bowling Green game. We already talked about it we got to let go of Missouri, and now it's on to Maryland. We have to move on."

Coach has a point here. Sometimes you just have to let things go, even if they seem good or difficult to do so. The easy joke to make here would be to re-write the popular song from Frozen but EDSBS ALREADY DID THAT so we're taking the road less traveled. I like to think that Kevin Wilson spends a lot of time communicating on Tumblr and was advised by all those temperamental preteens / otherwise emotionally wounded individuals to just arbitrarily "let go" of emotions / past games. 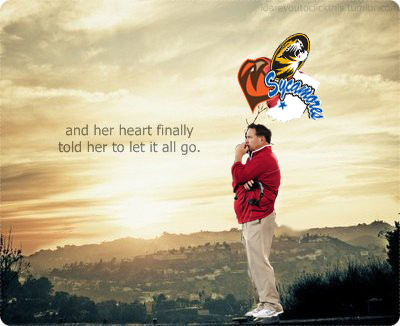 Can we win this game?

When you go up and down the schedule at the beginning of the year, everyone always likes to separate games into roughly the same three categories: should win, toss-up, and likely loss. I think everyone would put Maryland somewhere in those first two categories, maybe siding more with "should win" given that the game is at home and Maryland is more of an unknown commodity for Hoosier fans. Regardless: this is a winnable game for the Hoosiers and defeating the Terrapins would go a long way in helping them reach their season goals and finally washing the final bad tastes of the Bowling Green defeat out of our collective mouth.

IU is pretty good at scoring points, most of us know this. Indiana currently stands at 8th IN THE NATION in Success Rate (a statistic used by Football Outsiders to measure offensive efficiency) putting them in the company of Oregon, Alabama, and Michigan State. That is some ridiculously efficient football, which helps offset the lack of explosion this year (an unusually horrid 89th in IsoPPP, which is explained here), something we're not used to in the Kevin Wilson era. This team was 6th in IsoPPP last year while 45th in Success Rate, so those have essentially flip-flopped this year, and while it's not a one-for-one statistical replacement, it doesn't take advanced statistical knowledge to understand, conceptually, that multiple short plays can replace big plays as long as you consistently execute the plays, and Indiana has been doing that to this point.

Tevin Coleman remains the largest threat for the big play, but we've yet to see any similar threat of explosion from Shane Wynn (11.5 yards per catch) or Nick Stoner (13.8), and that's a change from the gaudy numbers Cody Latimer and Kofi Hughes put up last season.

Bill Connelly's Five Factors for College Football tell us that the team that wins the efficiency battle wins 83% of the time, so it's no small thing for the Hoosiers to remain as efficient as they've been, as it will take them to victory more often than not. It helps that Maryland is brutally inefficient on offense, coming in at 86th in Success Rate. They're quite a bit more explosive than the Hoosiers, however, checking in at 41st in IsoPPP, which isn't particularly noteworthy, but far more explosive than Indiana this season. The team that wins the explosiveness battle wins 86% of the time, so it stands to reason that the Hoosiers should do their best to lock down Maryland's big plays and make them execute in the proverbial half-court.

C.J. Brown is far more likely to beat you with his legs than his arm and the Hoosiers should key in on that. Force him to keep the offense on schedule by making accurate throws down the field instead of allowing him to get outside the pocket and freelance with his feet. He's had a lot of success in the zone read, and defending a well-executed zone read is just as much a head game as a physical one.

With the Hoosiers bringing the efficiency and the Terrapins bringing the explosion, this game will likely be decided by the last three factors: field position, turnovers, and who can finish drives. There's nothing nearly as fancy or statistically sexy about these factors as there is with the others. Calculating field position statistics gets a little winded, and I won't get into it here, but know that the winner of the field position battle wins 72% of the time, while the team that finishes drives better (points per trip inside the 40) wins 75% of the time. And if you win the turnover battle, you're victorious 73% of the time.

Here are Indiana and Maryland's overall ranks in the five factors heading into this game:

*Drive stats won't be available until week 7, and I didn't trust myself to calculate them correctly.

**I used eTO% for the turnover category, which doesn't factor in luck, but it's the best stat available to represent the fifth factor.

So, as you can see from the chart, Indiana has an established edge in efficiency and turnovers, while Maryland retains a big advantage in explosiveness and a slight, almost indiscernible, lead in field position. I'm keeping the numbers fairly rudimentary as I get a better hang on them, but the picture painted by the numbers reflects what the eye test reflected going in: these teams are good at different things, but it shakes out to a fairly evenly matched game. I'll say this, I'm happy the Hoosiers will be playing this one in Bloomington.

That was quite a bit of statistical gumbo there, I need a breather.

You're right. Have a GIF, on the house.

Is there anything Brian Knorr can do to stop CJ Brown?

I tweeted a few days ago about how C.J. Brown has performed (Kn)orribly (sorry) in two games against Indiana's current DC when he served in the same position at Wake Forest. Here is his aggregate line:

It wasn't just C.J. Brown that struggled, as Maryland scored only 10 points in both games, granted, it's not difficult to assume that, in football, when the QB is struggling, the offense is struggling. And while Knorr is dealing with different personnel than the guys he used to shut down C.J. and the Terrapins, it's not like his Wake Forest units set the world on fire, either. Based on S&P+, they were ranked 83rd in the first game and 34th in the second game. Indiana sits at 44th in the rankings right now.

If nothing else, Knorr has seen C.J. Brown and the Terrapins up close and personal multiple times during his tenure at Wake Forest, and that experience can't be discounted when he is preparing his unit and the coaching staff as to what they can expect.

This has all been incredibly insightful, take it on home and then do something silly.

I think IU can win this game a lot of different ways. It's not beyond their means to simply go out and outscore the Terrapins in a shootout, but I think Knorr will have his unit ready to make some plays on defense and force CJ Brown into some mistakes. The Hoosiers must, must, must get things figured out on special teams as well, the kicking game is actively taking points off the board for us and putting them on for the opponent via the awful field position we give up on bad punts and out-of-bounds kickoffs.

I think if Nate Sudfeld protects the ball and stays efficient, Maryland will struggle to keep up. But the miscues and stalled drives that let Bowling Green creep back into the game remain a concern. The best defense is a rested one, and sustaining drives on offense helps keep the guys on the other side fresh. Three-and-outs are never good, but they're particularly horrifying for the Hoosiers when the defense is already gassed.

Putting it simply: Suds and crew must make as many touchdown deposits as possible in the BANK OF KEVIN WILSON and he'll invest them in offshore bacon futures, and before you know it, we're #VICTORYBANKIN' (h/t LoneStarHoosier).

"You can't just throw all your money in a checking account. You have to diversify your portfolio. I don't throw a bubble screen to Shane Wynn every play, do I? You gotta have Roth IRAs, run the dang ball, hedge funds. Learn investment theory."

"It's tough to master short-term trading. It's gotta be a mindset. Like running the football. Tevin is a good runner but when he's trending downard you gotta go to D'Angelo for a bit. Just don't stop running even when you don't want to anymore. Don't stop trading either. Short-term market trends. Google up and learn it. We don't need mutual funds. Too slow. Gotta go fast."