I'm not mentally prepared to do this again.

Totally understandable. Last week's crushing loss to Bowling Green is still fresh in the minds of those who were unsuccessful in their attempts to mentally and emotionally repress what happened on Saturday. We all deal with these sort of losses differently, but I think we can neatly sum up the reactions into three basic schools of thought.

"Season is over. Kevin Wilson should be fired. When is this university going to care about this program and hire the next Nick Saban? Huh? HUH?!"

"Well that sucked. This week's probably gonna suck too. Maybe we still get to a bowl. Whatever; it's not like we can avoid death forever."

And, as you likely recall, this is the back-end of another home-and-home agreement, much like Bowling Green. Last year, Mizzou crushed the Hoosiers 45-28 in our Memorial Stadium. It was also Nate Sudfeld's worst home performance of his young career, going 21 of 39 for 229 yards, one touchdown and three interceptions. Take away a 77 yard completion to Cody Latimer and that line gets a lot uglier, too. Take away all his completions and it's definitely the worst game of his career. Convert all his pass attempts into interceptions and you'd have to wonder why Kevin Wilson would let him throw 39 interceptions in a single game.

They haven't faced any incredibly stiff tests to date, but neither have the Hoosiers and the Tigers have looked a lot better through three cupcakes than the Hoosiers have. Mizzou has scored at least 38 points in all three games and defeated each opponent by at least 3 scores. Their F/+ ranking puts them in the company of LSU, Baylor, and Georgia, for reference.

Maty Mauk may not be a household name just yet, but neither was James Knapke. Mauk is averaging close to 220 yards per game while completing 62% of his passes with 12 scores in only three games. He averages about 8 carries a game running, and he's more effective than his 3.6 YPC would indicate, as he uses his legs to convert 2nd / 3rd and short rather than busting out big plays with his legs. BG's Knapke did this seemingly every single time he absolutely needed to and it was infuriating.

When Mizzou really wants to run, they handed it to one of two talented running backs in Russell Hansbrough and Marcus Murphy, who are each averaging 5.5 YPC with 16 and 12 carries per game, respectively. Murphy has the larger role in the passing game but both are threats are on the ground. And with two receivers also averaging an identical 17.9 yards per catch in Bud Sasser (6-2) and Darius White (6-3), there's legit size and talent on the outside for the Tigers.

Their offense is ranked 25th overall in Football Outsiders S&P+ rankings, with the rushing game a paltry 48th but the passing game ranked among the elite at 10th overall. Combine this with Indiana's 52nd ranking against the run and 30th against the pass and it's easy to see on paper and on film why the Hoosiers will struggle to stop Mizzou.

The Tigers defense, however, while ranked 22nd overall in S&P+, fueled largely by their pass defense, is a woeful 66th against the run. Which is great news for Tevin Coleman and company, and lays the blueprint for the only possible way, IU can win this game, in my opinion.

I'm sorry, did you say there's a way IU can win this game?

Yes. I can also pass any and all sobriety tests you want to administer. There's a saying in indoor slick track go-kart racing that goes "You must go slow to go fast." Or at least I think there is. I only went once and my friend who was really good at it told me that. Come to think of it, he may have just been gaming me in order to ensure his own victory but I'll dissect all that later.

My point is: we all know IU's offense has had the need for speed since Kevin Wilson has arrived and I'm issuing my open call to grind this offense to a screeching halt for ONE GAME and see what happens. Drag the Tigers down into a good ol' fashioned Big Ten brick fight and see what happens. They've struggled to stop the run, we have a stable of talented rushers. They excel at scoring points, let's keep the ball out of their hands. This is how you see David slay Goliath on the football field all time. David comes out and plays keep-away for 60 minutes and win some low-scoring affair that looks a lot more like a basketball game against Wisconsin than the offensive blitzkriegs IU often finds themselves in.

I think the Hoosiers' defense is better than they were last season, but the lack of depth is killing us as the game wears on. Whether the offense scores or not, they're off the field in less than 4 minutes almost every time and the gassed defense is back out there immediately to play almost twice as many snaps as the offense. It's an unsustainable model and I think we've seen enough over the past few years to know when we've got to make some changes.

It's one thing if the offense loses their efficiency when they take their time, but I'd rather see that proven on the field than just avoided out of fear of the unknown. I don't see any outcome where we win a shootout with Mizzou, so slap a governor on the offense this week and see if we can make something happen.

Any reason to think our coaches have been at a tactical disadvantage this week?

THANKS A LOT, MIZZOU. CAN'T LEARN FOOTBALL WHEN YOU'RE ALL COVERED IN FANCY NUMBERS. NOW YOU'LL PROBABLY WIN BECAUSE WE CAN'T GOOGLE UP ON YOUR SCHEMES WHEN WE CAN'T TELL WHO'S WHO. 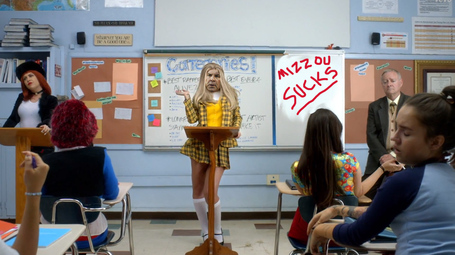