I think I speak on behalf of the entire B1G when I say that going to a bowl just isn't that big of a deal, you know? Twelve games is an awful lot and the whole "doing well on a national stage" is just so played. So, really, Bowling Green did us a favor.

Another soul-sucking dumpster fire interesting weekend of B1G football is in the books! Let's take a look at the CARNAGE REPORT.

Oh god this next segment is usually where we talk about which B1G teams have a shot at consideration for the playoff and can we just skip it? We don't have to do thi-

I've left Indiana on the bottom of Tier 4 because this is a Hoosiers blog and hope springs eternal. I think the greatest representation of an Indiana football fan is when one uses the phrase "hope springs eternal" in reference to the Quick Lane Bowl in Detroit, Michigan on the day after Christmas. I disturbingly projected the Hoosiers to win eight games while sober, which means I still see six winnable games on the schedule. Of course, if IU can't close the deal on Bowling Green, it's tough to trust them in any spot. HOWEVER:

The Big Ten is soooooo bad. 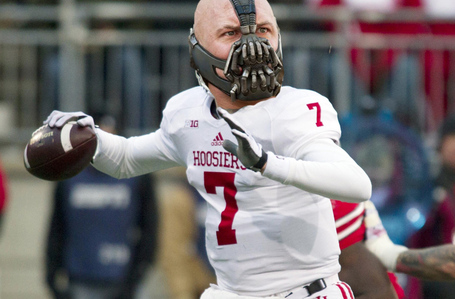 "Oh, you think the conference being bad is your ally, but you merely adopted being bad. I was born in it, molded by it. I didn’t see a win until I was already a man; by then, it was nothing to me but blinding!"

MICHIGAN STATE: At-Large Bid to the Cotton Bowl against Baylor