In which the author goes to home games at IU, U of L, and OSU, and describes his experience at each event.

Over the first two weekends of the college football season, I had the opportunity to attend three games. This mini-tour of Big Ten and ACC schools took me first to Bloomington, then to Louisville, then finally Columbus. Over the course of this trip, I was able to see a program on the rise, another that has seemingly completed its rise and is now a mainstay, and finally, a program that has been one of the powerhouses in college football for many years.

I. Indiana vs. Indiana State - August 30

Indiana football has high expectations this season. This is Year 4 of the Kevin Wilson experience, also known as the latest attempt to revitalize the gridiron Hoosiers. While the 28-10 victory over Indiana State was only the 11th victory under Wilson, his brand of high-scoring up-tempo football seems to be resonating in a state that is known for its basketball. In fact, the final score of last year's IU-Michigan football game (63-47) came close to the final score of the first basketball meeting between the two teams last year (63-52).

With IU students returning to school, and no more home games for another 4 weeks, the tailgates were out in full force that weekend. A threat of lightning at Memorial Stadium 20 minutes before kickoff may have turned away some potential fans, but the delay may also have been a blessing, as many fans were in their seats and ready for the opening kick. We've been through the recap of this game - IU won, the run game looked solid, the defense looked competent, but the passing game and special teams needed work. The early rain cooled temperatures down, and the stadium was a very pleasant place to be for an unusually quick and stress-free IU football victory. The overall game experience was quite pleasant, and while getting people the stadium for a nonconference noon game is never the easiest task, more people were on hand - especially for the first half - than I was anticipating. There's a lot for attendees to do and watch while at Memorial Stadium; however, these distractions still focus on the football itself.  For example, Knothole Park near the South End Zone features a miniature football field, the in-game promotions often feature football-related prizes, and attendees seemed to love the popcorn tubs that were meant to emulate the Old Oaken Bucket.

Unlike the other two teams whose games I attended recently, Indiana is very much still a program on the rise. With Purdue and Notre Dame also located within the state, along with a top mid-major in Ball State, IU has close competition all around it to attract recruits, and basketball is still its most discussed sport. However, IU's status in the B1G automatically gives them a place at the table, especially in the new Power 5 environment, and while the Hoosiers have only made one bowl game in the past 20 years, the history isn't entirely bleak. One reminder of this came when former IU standout and Terre Haute native Anthony Thompson, a star on the Bill Mallory teams of the late 80s, was honored before the game. However, aside from Antwaan Randle El and the optimism of Coach Hep, it's been a long two decades for IU football. They're not quite out of the wilderness yet, but there's been improvement every season under Wilson. If the team keeps improving its record, and Wilson continues to be the offensive mastermind that he's shown both here and as an assistant at Oklahoma, then IU might be faced with a rare prospect - protecting itself from losing its football coach to another program. 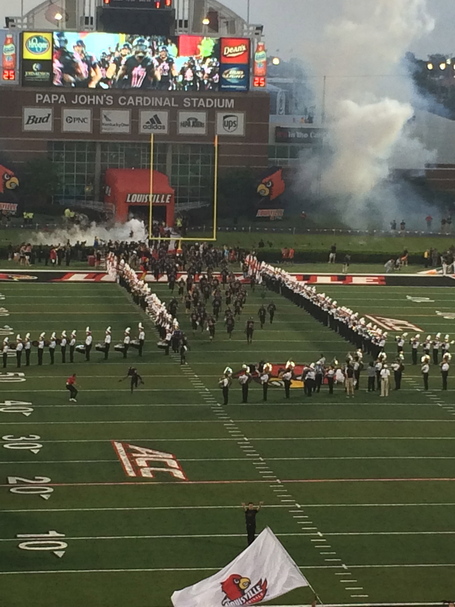 As some of you know, I recently moved to Louisville. The big talk here among sports fans for weeks and weeks was this game: An inaugural game in their new conference, with a new coach, on national television, against one of the traditional powerhouses of the sport. It had all the makings of a celebratory night, and the game's result, a 31-13 victory over the University of Miami, demonstrated the culmination of several years of effort to legitimize Louisville Cardinals football as one of the sport's perennial contenders.The game also served as a homecoming for re-hired coach Bobby Petrino, and after the final touchdown drive, the crowd chanted his name. If winning games means butts in the seats, then Louisville can look past both Petrino's Easy Rider transgressions at Arkansas and his initial spurning of the program eight years ago for greener pastures. I kept overhearing the "he may not be a great guy, but he sure can coach" line about Petrino, especially once the game was in the books.

If horse racing and basketball are the traditional, old-money sports in Louisville, football is the new-money athletic venture in the town. Papa John has been willing to lend his company's name to a gorgeous 55,000-seat football stadium. One distinguishing factor of this stadium is that each seat has a back, which makes for a pretty comfortable experience if you aren't standing up to cheer. Another factor is that the stadium sells beer, and patrons were taking advantage of this beverage option quite a bit. In-stadium beer sales have been a trend for NCAA teams, who have generated revenue from their fans in this way.

The Cardinals are a contender, their fans respect what the team is doing, and after a long road to get to this point, everyone is ready to take the ACC by storm. This effort to legitimize Louisville football started over 20 years ago under coach Howard Schnellenberger (who is a favorite among SB Nation writers), and the longtime coach was rightfully honored at halftime. The halftime festivities also included a 10-minute fireworks show that added to the already celebratory atmosphere, and most of the Cards fans wore black, since this was a "BlACCout" game after all. While the Cardinals did not struggle on the football field  - the Hurricanes had to start a true freshman at QB due to injuries - the consensus is that there will be plenty more challenges coming up for Louisville than in previous years. After all, road games against Clemson and Notre Dame loom, and Florida State rolls into town at the end of October. But that is part of what their new status entails, and the message all night was evident - Louisville is here, and now that they have a seat at college football's big boy table, they aren't going anywhere either. 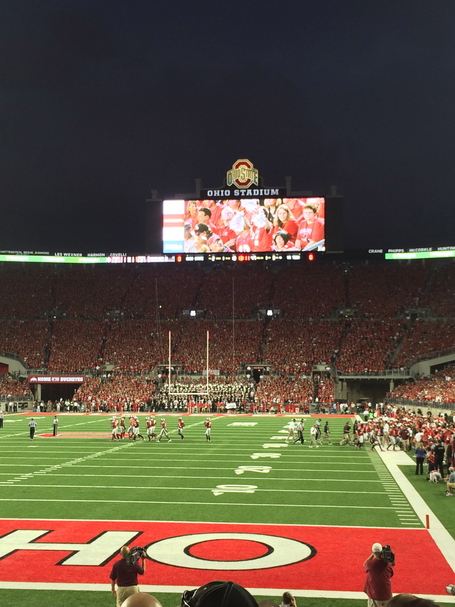 You are surrounded by 107,000 people who all are asleep. Now, imagine all of them waking up at the same exact time.

I got this feeling in the middle of the third quarter in Ohio State's game against Virginia Tech on Saturday night. A noisy and fired-up crowd in the Horseshoe had simmered down when the Hokies took a two-touchdown lead into halftime. Now, with the Buckeyes driving again, the crowd woke up and had returned to its pregame noise level. And when Ohio Stadium gets loud under the lights, it's a sign that you're in the heart of one of the nation's best college football environments. Although Jim Tressel resigned under a cloud a few years ago, the team didn't miss a beat after hiring Urban Meyer, an Ohio native who is in his third season in Columbus.

The Ohio State University and its fans are well-aware of its status in the nation, and they're very much at ease with this. The school's home stadium, nicknamed the Horseshoe for its U-shaped design, makes no secret of its grandiosity. OSU's neighbors to the north in Ann Arbor want to be as subtle about their gigantic stadium as possible. This isn't the case here, and OSU flaunted its size, noise, and other qualities for almost four hours on Saturday night, and there was also no doubting how to spell the name of the state by the end of the game.

One highlight of the night was the Best Damn Band in the Land's halftime performance, which consisted of a mix of TV theme songs from past to present. While the OSU band has come under scrutiny recently for its inappropriate practices off the field, the band's quality did not seem to be affected. In addition, the traditions of Script Ohio and Hang On Sloopy lived up to the hype.

The Buckeyes tend to sometimes have a very vocal and hostile fanbase online. However, at the game itself, I found the OSU fans in our section to be friendly, knowledgeable, and even self-deprecating when we made the requisite Jim Tressel tattoo and sweatervest jokes. Adding to this experience was the fact that one of my friends with me was a Virginia Tech alum. Hokie fans generally seem to travel well, and a steady stream of maroon and orange shirts blended in nicely with the scarlet and gray that covered most of the Horseshoe. Even after the eventual 35-21 Virginia Tech victory, Buckeye fans were naturally disappointed, but were courteous and congratulated my Hokie friend.

So, what can a school like Indiana take away from the in-game experience at Louisville or Ohio State? First of all, scheduling is important. Louisville got its first ACC game on a nationally televised stage, and Ohio State scheduled a nonconference opponent that also has a strong football tradition and fans who are willing to travel. Also, being courteous to the opponents certainly helps, and makes them feel welcome, win or lose. Another important aspect (and I was often guilty of not doing this as an IU student) was that at Louisville and OSU, everyone was in their seat by kickoff. True, IU played an early afternoon game against an FCS team while the other two played night games against Power 5 opponents, but the difference in kickoff atmosphere was quite clear.

While good opponents certainly help, a consistent attendance base at IU will likely boil down to one thing: winning football games. Sure, Wilson is only 11-26 right now as IU head coach, but with the potential of the current team, who knows what could happen? The Hoosiers have gotten better every year under Wilson, and we'll get a better sense of how the team is during the Bowling Green game tomorrow. Until the losses pile up though, there is reason to believe that a surprising season in what seems like a down year for the Big Ten could be in the works. But if your goal as a fan is only to get to the tailgate on Saturday afternoons, you'll never get to see this happen.