Indiana gets the latest shot for a B1G team to topple the almighty MAC. It's MACtion time. (Also Kevin Wilson is going to talk to us about love and the internet.)

We sure did! But that doesn't really help us on Saturday. We'll be deep in hostile, Ohio territory when our team kicks off in Bowling Green for the first of two back-to-back road games. If IU is to secure their first bowl trip since 2007, they're going to need to have some success on the road. Coincidentally, that 2007 squad also had a Week 2 road date with a plucky MAC squad and after bursting out to a 34-7 lead by halftime, held on to win 37-27. This Bowling Green team is a lot better than that Western Michigan team was, but I think the 2014 iteration of the Indiana Hoosiers is better as well.

That said, BGSU has lost their starting quarterback Matt Johnson for the entire season. Hoosier fans may be fooled as to how good BGSU was last season, as they likely only saw the 42-10 drubbing in Bloomington and then forgot about them entirely. But the Falcons won ten games last season, including an utter dismantling of known BCS-crasher Northern Illinois in the MAC Championship game. Johnson was an integral part of that team's success, completing 64.2% of his passes for 3467 yards to go with 25 TDs and only 7 INTs.

The Falcons have since handed the keys to sophomore and FT. WAYNE, INDIANA NATIVE James Knapke who played decently in his first start against the Virginia Military Institute (FCS), completing 71% of his passes for 237 passes along with 1 TD and 1 INT. Granted, the level of competition that VMI can provide isn't comparable to most of the schools in the MAC, let alone a B1G program, so stiffer tests lie ahead for Knapke.

In theory, a team that lost their immensely talented quarterback and has surrendered almost 900 yards of offense through the air in two games against Western Kentucky and VMI would be easy pickings for the Hoosiers, but I think we all know that Indiana can never ever ever take anything for granted ever. Especially when it's on the road. I don't care if they play my old high school on some random prep field in Montana, weird (read: bad) things happen to us away from Bloomington. It's not like Matt Johnson was the only thing BGSU had going for them, either.

Yes, the defense, particularly the passing one, has not shown themselves to be very good through two games against two teams worse than Indiana. But on offense, they still have Travis Greene in the backfield, who averaged 5.7 YPC last year on his way to 1749 total yards and 13 touchdowns. Back with Greene is also Fred Coppet, who Kevin Wilson mentioned by name in his press conference, who is averaging over 9 YPC on the young season. The quote was also amazing:

It would be my guess that Indiana would key on the run game in Saturday's tilt and make Knapke try and beat us through the air. And if the Falcons' pass defense through two games is any indication, Knapke will have to put up some video-game-on-rookie-difficulty numbers to keep up with Suds and company.

Neither Sagarin nor F/+ ranks Bowling Green very far behind the Hoosiers, but there's also a lot of variance in the early season with rankings that rely on formulas. Obviously they'll need a lot more data to become more reliable, particularly with Indiana only having one game against an FCS team to go off of for now. In the preseason prediction article, I had the Hoosiers scraping out a one-point win in a high scoring contest and I stand by it. I think this game will be tough because of the two-week layoff and the foreign environment. Maybe Matt Johnson's absence makes it easier for the Hoosiers, but I think this will be an excellent early-season test for our defense.

Why didn't Bowling Green make their mascot a green falcon who's bowling?

Because life is a dark journey of disappointment and failure.

Kevin Wilson didn't, by chance, give some marital advice in a comparison about his team's level of commitment to the program, did he?

I don't know if I've changed so much as much as the first time just trying to see who's in. Now you know they're in because they're here because some of their buddies chose not to be and went by the wayside. There's good buy-in. Initially sometimes you're doing things hard enough just to figure out are you in or out. You know, a guy gave an analogy the other day on a scale of 1 to 10, are you in or out? He goes, no it's either yes or no. Did you marry your wife on a scale of 1 to 10 as a 7? No, it's a 0 or a 1 and you married her, and let's go. She's the one. 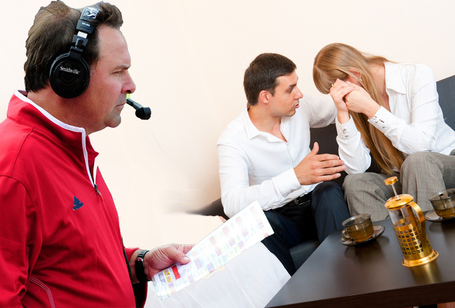 "Dangit, Matthew. I like baseball too but not this time of the year. This is marriage season. Turn on the HGTV, thumb through an issue of that 'Real Simple.' Get some tape on your neighbors who have been together for 50 years. The Pattersons are a winning program, been around a long time. You can learn from them. Learn marriage."

"Sheila, I don't want to hear about the Davids and, uh, the Jeremys you could be with. They offered you a ring, right? And you turned them down. You chose to go elsewhere. This ain't about a chip-on-your-shoulder, they recruited you. Love the one you're with."

"There is no 'marriage offseason.' You gotta be in the film room, you gotta be on Pinterest with crafts and whatever and all. What's that saying on those Lowe's commercials? Never stop improving. Write it on the door."

Our passing game looked atrocious last week. Can we fix it?

I've never spent much of Kevin Wilson's tenure worried about our ability to throw the ball. Yes, the receivers struggled to separate and Suds seemed off through the Indiana State game a couple of weeks ago. Part of that falls on the Sycamores loading up the field with defensive backs, which also helped Tevin Coleman and D'Angelo Roberts run all over them, so you should give them credit. However, Nate Sudfeld will need to be sharper and I think his receivers getting some wider windows will help settle him down.

I think Dominique Booth could really help this receiver corps, as he offers a size / speed combination that isn't eminently noticeable on the field right now. But I assume his lack of run is an indication of his readiness, and the onus is on him to remedy that. When he's ready to play, he will play.

Did Kevin Wilson say any other phrases that we might convert into a running joke?

We'll put a taped game on, and let's watch football, learn football. It's a great classroom, and you can Google up all the time. Our guys, too, we've got iPads and stuff, and we're trying to get our guys, too, to understand, as you watch football and learn football, it's better to watch it as a group so it's better for three or four of you guys to get together and talk about situations, man, that was a bad penalty; man, look, it just cost those guys, and the kids are talking about it instead of you just watching the game by yourself. 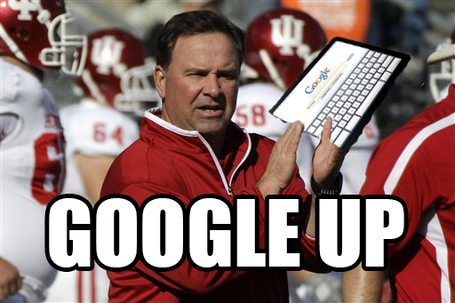