The Hoosiers begin their 2014 campaign with some of the highest expectations in years. Unfortunately, an opener against the FCS Indiana State Sycamores won't give them a chance to really prove anything, but they must avoid disaster: both on the scoreboard and the trainer's room.

Tickets? From $45 through IUHoosiers.com, and from $19 through StubHub.

What's Vegas Saying? Nothing. Off the boards due to FBS v. FCS.

DIDN'T WE BEAT THESE GUYS BY LIKE A BILLION LAST YEAR?

Sure did! A couple of pretty awful plays right before and after halftime shrank the score to 45-28 before the Hoosiers stepped on the gas en route to a 73-35 beatdown. The game would serve as an excellent microcosm for the rest of the season, as the offense could score on anybody and the defense could be scored on by literally anybody, including FCS-level competition.

However, this isn't the ISU of last year, or even the ISU of 2012 (who put a legitimate scare into the Hoosiers in Week 1). Known FCS terror-lord Shakir Bell (7.7 YPA in two games against the Hoosiers) is no longer around to go full-Reggie Bush up and down the field. In fact, the Sycamore offense will have five new faces along with six returning starters, among them are quarterback Mike Perish. Perish has been up and down against IU in his two games against them, going 31 of 60 for 329 yards and 3 touchdowns against 2 interceptions. ISU leaned more on Bell to move the ball as Perish played the often-used "game manager" role for the Sycamores. He'll need to play a whole lot better than he's shown if ISU is to pull off the big upset. Perish the thought! (ducks)

ARE YOU SURE SHAKIR BELL ISN'T GONNA TURN UP IN THIS GAME? I'M TERRIFIED.

No, child; you're safe now.

ANY BIG CHANGES TO OUR ROSTER?

Lots of familiar faces remain for the Hoosiers, particularly on the defensive side despite the switch to the 3-4 after the hiring of Wake Forest's Brian Knorr. AJ had an excellent write-up this morning in regards to the defense, make sure to check it out. The only thing I'll add is that Darius Latham is not listed as a starter at DE or DT, instead the 6-5, 315-pounder is listed as the backup DT on the two-deep depth chart that Indiana released to the public. However, I would expect Latham to be used in a multitude of different ways in a rotation with the other lineman in an effort to keep guys fresh. Typical 3-4 lineups ask lineman to occupy blockers to free up space for the linebackers to create havoc, which can tire guys out quickly. Kevin Wilson had an excellent take on the importance, or lack thereof, of the two-deep, which furthers my belief that Latham isn't actually expected to be a "true backup":

[W]e don't post [the two-deep] to the team, it's not in the locker room, it's not on meeting room doors. They practice every day, they know who is one and two and there are some three's that are going to play, that maybe aren't on your piece of paper right now. I expect many guys to play each and every week. I expect guys to help us win each and every week, I'm not really concerned with who starts because there will be twos playing as much as ones. One guy might go out there first, because somebody is going to be the first.

On offense: the departure of Tre Roberson has left Nate Sudfeld as the lone captain of the ship, which many believe will ultimately be best for the team. It's not that Sudfeld is clearly better than Roberson or the other way around. I, like others, firmly believe that a team with two quarterbacks has no quarterbacks. This offense needs a field general who must be allowed to make mistakes and be given a chance to get into the flow of the game without having to look over his shoulder for the hook. The quarterback battle between the two was much-talked about in the Spring and I didn't really have a preference of a winner, I just wanted a clear-cut starter.

Kofi Hughes, Cody Latimer, and Ted Bolser have left, taking their massive production with them. Replacing them are familiar faces in Shane Wynn and Nick Stoner, along with running back turned wideout Isaiah Roundtree. These three will be looking to replace the production of Hughes, Latimer, and Bolser, but they'll have to do it without their size. Kofi Hughes was the smallest of that trio, and he was listed at 6-2; whereas Stoner stands tallest among the new starters at 6-1. Size isn't everything, but it sure helps, as big, leaping wideouts can certainly erase mistakes when it comes to bad throws.

TIE IT ALL TOGETHER FOR ME.

This game should be a laugher from the get-go. But we've all been around this program long enough to know that what "should happen" often eludes this program at the most inconvenient times. The Hoosiers can't afford to sleepwalk through this game and lose it, or it will make any season goal we had at the outset nearly impossible to achieve. Further, you want to make sure everyone gets out of this game healthy. It wouldn't get much worse than losing a key player to a season-ending injury during a game we would have likely won even if he hadn't played a snap.

ONE LAST THING: DO YOU KNOW HOW KEVIN WILSON FEELS ABOUT ENERGY DRINKS?

You're in luck, he spoke at length about it during his press conference:

I'm not flat a lot of days. I don't drink decaffeinated coffee, but I don't drink a lot of coffee. I've never had one of those energy drinks. I don't need those. I'm kind of ready to roll. Nothing against those 5-hour guys, and all them Monster drinks you guys have, but I don't need that. I'm ready to roll. I was ready the first couple of years, but I think the team is more prepared and that excites me. Man, you got to go play. You know? And everybody is going to say, you beat these guys the last couple of years, you got a better team, na, you got to go play.

YA HEAR THAT? K-WIL DON'T NEED ALL THEM MONSTER DRINKS. HE'S READY TO ROLL. 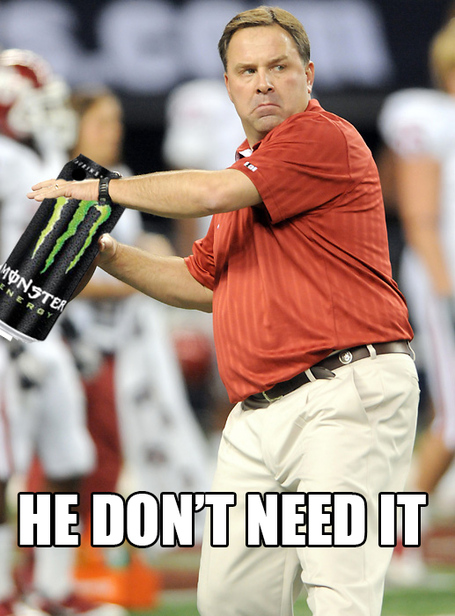 These previews will get a lot more in-depth and insightful as the season continues. But with very little information available at the outset of the season and the caliber of the upcoming opponent, there simply isn't a lot to go on. Like Wilson said, "you got to go play." Then we can break this team down a little better.