How Uneven is the 2014-15 Big Ten Basketball Schedule?

Taking an in-depth look at next year's Big Ten schedule, through records of conference opponents and distances traveled for each team.

Share All sharing options for: How Uneven is the 2014-15 Big Ten Basketball Schedule?

Since next year's Big Ten basketball schedule was first published back in late February, I've been interested to see how the new 14-team layout might affect parity in an 18-game conference season. This year, each Big Ten team will play a home-and-home against five teams, whereas each team will play four teams only at home, and four teams just on the road. This will be different from last season, in which each B1G team played seven home-and-homes, two home only opponents, and two road only opponents. Thus, instead of playing about two-thirds of Big Ten teams twice, each conference member will only get home-and-homes against about one-third of the B1G.

As a result, I wanted to figure out how imbalanced this new conference schedule would be, both in terms of the opponents that each team faces, as well as the amount of distance traveled for each game. I've been playing around with this for a while, but with basketball back in the spotlight as the Hoosiers took on opponents in Montreal earlier this week, I decided this would be a good time to finish up this analysis. Though let's be honest - basketball is always in the spotlight here in Indiana.

The scheduling grid for the entire Big Ten Conference can be found here. I also made this table specifically of IU's opponents in the 2014-15 season:

As you can see, we once again get Purdue twice this year - which is how it should be - along with two more east coast trips in addition to the two we will be making to Madison Square Garden before conference play starts. Avoiding a Minnesota roadtrip to The Barn, which has been a tough location for us in recent years, will be nice; however, we will only play Wisconsin in Madison, a place where we haven't won since 1998, and that game will be nationally televised as part of ESPN's Super Tuesday.

Now, let's take a look at how each team in the Big Ten performed in their conference last year:

Maryland and Rutgers are in italics because of course they weren't part of the conference last year; however, for the purposes of this analysis, let's lump their records in with the rest of the teams. After all, Maryland played in the ACC, which is always competitive, and Rutgers played in the American, which gave us the national champion. So while their former conference's RPIs may not have been as good as the Big Ten's, they still were in solid conferences and played some tough opponents; thus, I am not going to adjust or exclude their records for this analysis.

The next thing I did was I took these conference records and plugged them into the scheduling matrix. I averaged the records of each opponent, giving double weights to the opponents that each team plays twice. If we factor in last year's results to this year's conference opponents, we find that Northwestern has the toughest conference schedule. Because a .500 Maryland team and a well below .500 Rutgers team have been added to the conference, this means that the average opponent records are not at .500, and they end up being closer to .486. Here's how it breaks down:

So, good luck to Northwestern on getting that first NCAA Tournament trip. Not helping the Wildcats' cause is that they're the only team to face home-and-homes against Michigan, Michigan State, and Wisconsin. Meanwhile, last year's Big Ten champs face a relatively easy road, especially in their away games, as they only face Indiana, Maryland, Penn State, and Purdue on the road. We also see some fairly large data discrepancies in home and away games for some teams, such as Illinois and Minnesota getting a manageable home schedule but having a tough road for away games.

Now, let's look at the travel schedules for each team. This Mgoblog diary from last year talks about proposed football divisions, but it also shows distances from school to school, as well as average distances between each university. I used this chart to calculate the average distance each Big Ten team will travel during the 2014-15 season by adding the miles traveled for each road game then dividing by nine. To normalize the distances, I used the percentage of difference between the distance traveled for the games and the average distance to each Big Ten campus. Below are those results:

So, only four out of 14 teams travel more than their average distance to other B1G campuses. As you can see, Wisconsin has a particularly nasty travel schedule, as Frank the Tank and company will travel about 12 percent more next season than their average distance to each B1G school. This includes away games to both of the two new schools as well as Penn State. Meanwhile, not only do the Wolverines not have to travel much, but they also have an easy away schedule, as seen above. And while Illinois is tied with Northwestern for the toughest away schedule, they also don't have to travel as much as the Wildcats, which gives them a bit of a reprieve.

On average, teams will travel about 7 percent fewer miles than their average distance to Big Ten schools. This makes sense, because teams will only be traveling to 9 of the 13 campuses during the season. Indiana is about at the average traveling distance, as the Hoosiers only travel an average of 387 miles per away contest, even though their average distance to each B1G school is 416 miles.

Finally, let's end this analysis by plotting the two different measurements together. This chart shows the away team conference opponents' record for each team (last column of Table 3) on the x-axis, while the percent distance that a team will travel throughout the 2014-15 season (last column of Table 4), compared to the average Big Ten school distance, is plotted on the y-axis (click to enlarge). 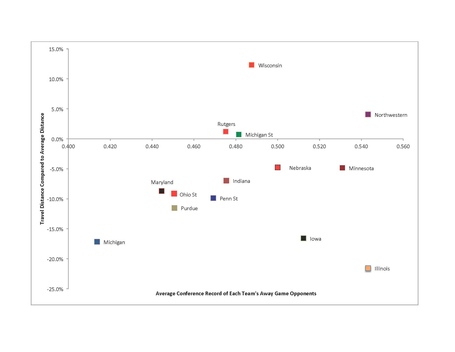 This scatter plot further demonstrates the scheduling disparities, along with the trends that we've seen from the earlier tables. Northwestern gets shafted with both a tough travel schedule and tough away schedule. Meanwhile, Michigan gets a soft away schedule and a manageable travel docket (no trips to Minnesota or Nebraska, which are further away from Ann Arbor than the east coast schools).

However, we have to take this analysis with a grain of salt. Last year's conference champions Michigan have lost many of their players, as have Big Ten tournament champions Michigan State, whereas Wisconsin is projected to be at the top of the standings. Of course, we remember how much Indiana fell last season, whereas Nebrasketball exceeded all expectations. The volatility of the Big Ten schedule could eventually produce more parity, as teams might either improve from last season, or regress toward the mean.

So, what can we learn from this analysis? I'd like to offer a few takeaways: