Karlijn Keijzer was an IU doctoral student in chemistry, originally from the Netherlands, who rowed for the Hoosiers during the 2010-11 season.

I hate to start this summer weekend on a down note, but Indiana University received tragic news this morning in connection to yesterday's Malaysian Airlines Flight 17 crash in Ukraine. Karlijn Keijzer, a former varsity rower for the Hoosiers and current doctoral student at IU, was on Flight 17 when it was shot down, which resulted in everyone aboard being killed. This was an outrageous and senseless event, and hearing the news about the almost 300 lives lost in the crash has been awful. 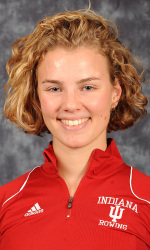 Keijzer, 25, who originally hailed from the Netherlands, rowed on the Varsity 8 boat for the Hoosiers for the 2010-11 season. During that season, the team - which made it to its first NCAA championships this season - finished 14-5. Keijzer had been living in Bloomington, and was working toward her Ph. D in chemistry, after having received her master's degree in Amsterdam.

Our thoughts and prayers go out to Keijzer's family at this time, as well as to the families of the other victims on Flight 17.