Finding an IU bar and searching for signs of Rutgers life in the Big Ten Conference's new second home.

I haven't written much recently for a couple reasons. One is that I have been updating the Facebook page, which you all should like. The other is that I've spent the past couple weekends in New York City, with a few days in DC in between. Or as long-standing B1G commissioner Jim Delany now calls it, the ultimate Big Ten road trip (Sponsored by Ro-Tel). With two basketball games scheduled in Madison Square Garden next season and a football game in nearby Rutgers, the Hoosiers will become frequent visitors to the Big Apple. In addition, we all know Rutgers is officially joining the conference on July 1. Because of this, I decided to look around the city for signs of Big Ten conference life to see if the Big Apple had become the B1G Apple.

The fact that the East Coast is the Big Ten's newest target for growth is no secret. Along with the two teams entering the conference, the Big Ten is opening a second office in New York City. Jim Delany is originally from the area. The Big East conference, while still a basketball force, no longer has any more FBS schools. Thus, the NYC market for big-time college sports, if there really is one, is ripe for the taking. And the Big Ten conference seems to be pushing its expansion efforts not because of interest from the populace, but instead through relentless force and big-money television deals. Like it or not, the conference isn't going to stop this push any time soon. Indiana must have recognized this effort, because they've scheduled two games in "The World's Most Famous Arena" before conference play starts - one with Louisville and the other with Georgetown. MSG will be Assembly Hall East next fall, which is important, because we need to step up our game with Rutgers in their home market.

On the night that I arrived in Penn Station, I immediately saw lots of people wearing sporting gear of some sort. I was optimistic when I saw that the names on the jerseys started with a red "R" on the front. Was this a sign of Big Ten fever hitting the Big Apple? Could these be the invisible Rutgers fans I'd heard so much about? Alas, I looked a little closer, and I noticed these jerseys said "RANGERS," not "RUTGERS." My bad. But this signifies the force that Delany and company will be working against - New York City is a professional sports town. Every major sport has at least two teams in the New York metropolitan area, and these teams are long-standing parts of the culture of the city. Can Rutgers football compete with the die-hard Jets and Giants fans in the area? Will their basketball team replace the woeful Knicks and the inconsistent Nets on the back page? At this point, it's hard to envision. Of course, I may be too hard on our new conference foes, since not many college sports are in season right now. However, I was last in NYC on a college football Saturday in November, and even then other college teams from across the country outnumbered Scarlet Knights fans.

Luckily, if you're an IU fan in the city and you want to watch a Hoosiers game when there isn't one at MSG, there is a nice option on the corner of 52nd Street and 2nd Avenue in Manhattan. Even before you walk into Traffic Bar, you can see an IU flag greeting pedestrians from outside. Go inside, and the Hoosiers regalia are on full display. I stopped by on a Saturday afternoon, and unfortunately, owner Joey Morgan was not in at the time. But according to the bartender who was there, Traffic is the place to go in the city for IU game watches, especially for basketball. She said that unfortunately the crowd is not as good for football, but that basketball will keep bringing out the fans, even during the down years. 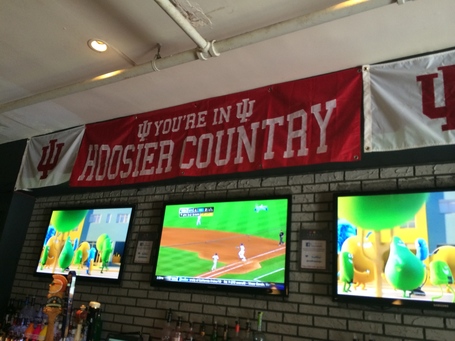 To demonstrate its IU credentials, Traffic sells Sink the Biz buckets, AMFs, and Hairy Bears among other drinks. Also, it shows the Little 500 every year (which as you may know, is broadcast annually on Mark Cuban's fledgling television network). Surprisingly enough, the bar also hosts watch parties for Tennessee Volunteers and Miami Dolphins games. However, neither of these teams feature the same amount of memorabilia as IU does, so if you're in the city when a Hoosiers game is happening, check out Traffic - it's an easy two-block walk from the 6, E, or M lines at the 53rd and Lexington Subway stop. 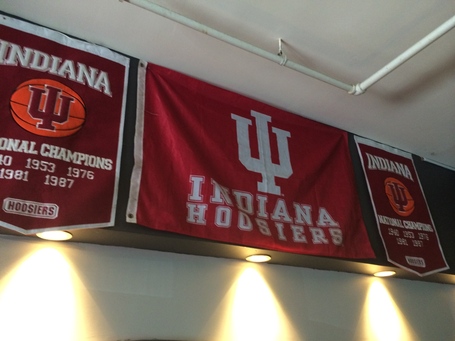 As I was walking towards the Subway the morning after my friend's wedding, I still hadn't found much about the supposed New York City Big Ten team. But as I was walking down Broadway on the Upper West Side, I finally found what I had been looking for: 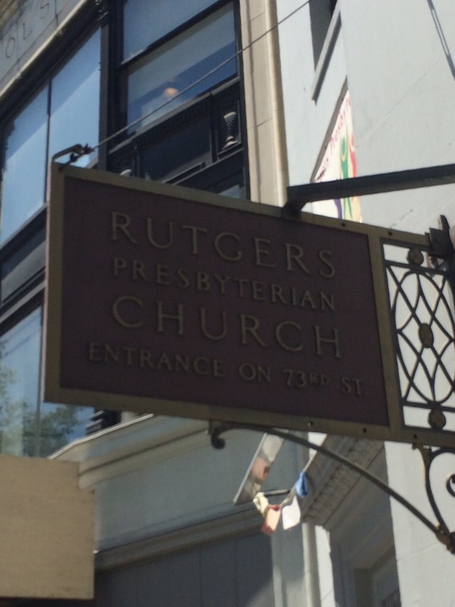 There you have it, folks. Rutgers fever is alive and well in the city. Welcome to the Big Ten.