The teams: The "How in the world are we worse than these guys" PurpleCats (aka the Northwestern Wildcats) and your Indiana Hoosiers!

What does Vegas say: Opened pickem, is anywhere between pickem and Indiana -1.5 as of this writing.

What does Willie say: 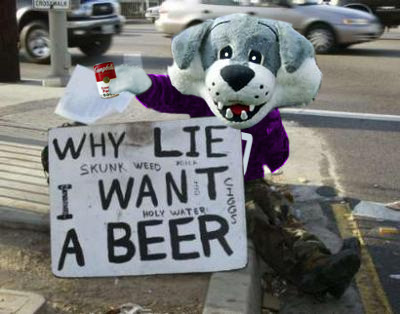 The current mood of IU fans right now, judging solely by the iubb hashtag: We really need to win this game for fanbase sanity.

How important is this game on the usual scale: 8.5; at this point, any win is a good win.

How important is this game in one word: Kinda

Over/under number of nets Coach Crean would cut down if we won this game: 0.5

My completely biased, barely researched analysis: We played horribly the last time we faced Northwestern. The team wasn't able to get past the high of beating Wisconsin, and it cost them. The lone positive to come out of the Iowa postponement is that it gave the Hoosiers a few days to (hopefully) rest up and prepare for Northwestern. If we're lucky, Chicago-based alums and fans will invade Welsh-Ryan, and make it Assembly North for us. If not, we have to be ready. We cannot afford to lose to Northwestern again this season. We just can't.