The teams: The scUMmy School Up North Walmart Walverines (aka the Michigan Wolverines) and your Indiana Hoosiers!

What's at stake: For Michigan, continued ownership of the top of the Big Ten. For Indiana, defending home court in a year where doing so is at a premium against a very good team.

What does (whatever this is supposed to be) say: 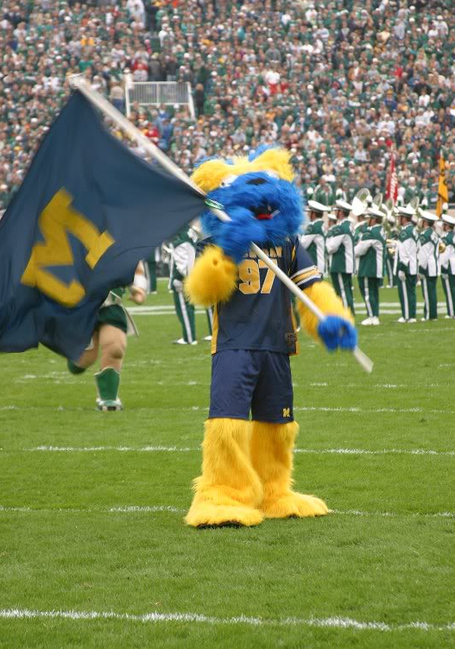 (Apparently, this was a Wolverine Michigan had at one time. Who knew?)

The current mood of IU fans right now, judging solely by the iubb hashtag: Excited, and ready to wake up and beat the Wolverines.

How important is this game on a scale of 1-10 (where 1 is an exhibition game and 10 is the National Championship): 8.5; Big game, in Assembly Hall, nationally televised, and a team that really needs a few wins.

Over/under number of nets Coach Crean will cut down if we win this game: 3

My completely biased, barely researched analysis: I'll be honest, Michigan is a very good team even without Mitch McGary, as they've proven for much of the year. Indiana pretty much has to come out and play 40 minutes of smart, confident basketball, and even then they may need to catch a break or two. One positive is that, in games following a loss this season, IU is 5-2, with the only two losses both coming against Michigan State. However, since Michigan beat Michigan State, those two losses my be significant. I've just about given up trying to understand when and how this team will play well on any given night.