The teams: The UNL/UN/NU/whatever abbreviation they claim Maizestrippers (aka the Nebraska Cornhuskers) and your Indiana Hoosiers!

What's at stake: For Nebraska, a dark horse bid in the NCAAs or NIT. For Indiana, breaking some of Nebraska's Pinnacle Bank mystique, and avenging the 2012 upset in Lincoln.

What does Vegas say: The game opened at pick'em, and has moved to Nebraska -1 as of this writing.

What does Herby say: 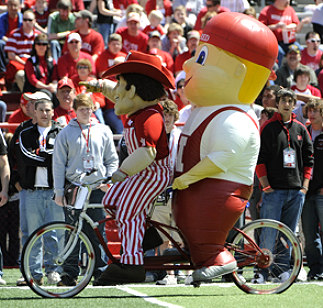 (Herby is the gimmick infringing one in the cowboy hat, and according to many, is the less terrifying one. Your terror may vary.)

How important is this game on a scale of 1-10 (where 1 is an exhibition game and 10 is the National Championship): 7; slightly more important than beating Illinois, not as important as holding serve in Assembly the rest of the way.

Over/under number of nets Coach Crean will cut down if we win: .75

My completely biased, barely researched analysis: Nebraska's only home loss this season was by 1 point to Michigan, aka the team currently leading the conference right now. Then again, they've also lost at Penn State and at Purdue. Then again, we lost at home to Northwestern. Then again, we beat Penn State at Penn State. So, hopefully, we have enough talent and maturity to get the victory. However, in this year's Big Ten, just about anything is possible.