The teams: The Tarpwestern Wild Kitties (more commonly known as the Northwestern Wildcats) and your Indiana Hoosiers!

What's at stake: For Northwestern, a 2nd Big Ten win and a step closer to .500. For Indiana, a 2nd straight Big Ten win and possibly momentum going into the second meeting with Michigan State next week.

What does Vegas say: Unknown as of this writing; check your local bookmaker for further details!

What does the Wildcat say: 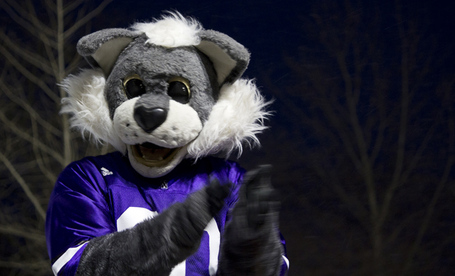 The current mood of IU fans right now, judging solely by the iubb hashtag: Either "Court storming should just be a thing now, so lighten up" or "LOL at Ohio State getting upset in Minnesota". Both are acceptable.

How important is this game on a scale of 1-10 (where 1 is an exhibition game and 10 is the National Championship): Honestly, about a 5. More important than a tough non-con game, but less important than pretty much every other Big Ten game.

Over/under on number of nets Coach Crean cuts down if we win this game: 0.5 (Take the under)

My completely biased, barely researched analysis: Northwestern has beaten a good team this year. That team was Illinois. (Cue booing) Other than that, they haven't looked particularly impressive. Indiana has played pretty much everyone tough for at least part of the game, so as long as they stay focused on the team they're playing and not look ahead to Michigan State, they should be fine.