Quick follow-up on AJ's look at the Sophomore bump, from an efficiency perspective.

I've been running my player efficiency ratings long enough now to have some longitudinal data on how players develop. So, with AJ's great post in mind I ran statistics of the 67 seniors who played all four years in the conference between 2007-2013, and made a graph which you can see below. It contains the overall averages of their time on the floor (aka possessions played), their per-game productivity, and their per-possession productivity. If you're not familiar with my efficiency statistics, here's the elevator speech: I try to value each players' contributions (points, rebounds, assists, etc.) and efficiency (how many missed shots, turnovers, etc.). I calculate both per-game and per-possession rankings by taking the box scores from Big Ten teams' regular-season conference games and running them through my player efficiency ratings to determine the individual worth of each player. The what and why can be found here. 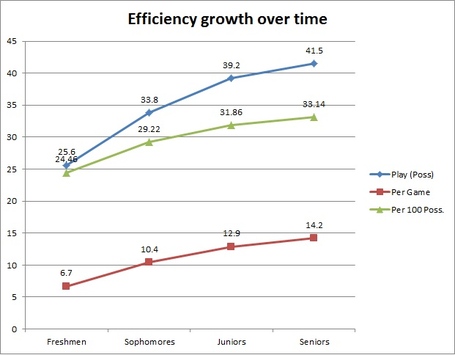 You see how playing increases by the biggest amount from freshmen to sophomore, a good amount from sophomore to junior year, and not very much from junior to senior. It's not surprising that the per-game production also rises, but the per-possession efficiency also rises throughout. The statistical jump from freshmen to sophomore year will usually be seen in the performance on the floor in terms of fewer missed shots and turnovers, and more free-throws drawn and stops made, etc.

Now, some players definitely regress throughout their careers, and some get bench time despite their solid per-possession play. But looking at the aggregrate stats helps us get past individual statistical cases like Verdell Jones, who was always pretty close to his freshman level of play, or Chris Kramer who started out solidly, had a very nice sophomore campaign, and slowly regressed over the next two years, or the explosive development of someone like Jared Berggren. However, Zack Novak of Michigan was a player who fit the average improvement arc pretty well, if you're looking for a specific example.

Tre Demps and Shavon Shields are two guys I'll be watching closely, because they may be relied on for putting up points for teams that currently have lots of question marks. But, the one guy I think we may have missed in previous conversation as a possible breakout candidate is Denzel Valentine, who plays wing but fits a more point-guard statistical profile, showed lots of ability as well as a Daniel Moore-like penchant for turning over the ball. Valentine cuts down on his turnovers and raises his outside shooting to a dangerous level (as most frosh points do), and he's my darkhorse candidate for biggest improvement.  Thoughts?