Because the end is only the beginning.

Share All sharing options for: The Transitional Period Motivational

Another season of Indiana football has come to a close, and as it often does, it comes at the end of the regular season, rather than after a bowl game. In a season begun with high hopes, only the slightest progress seems to have been made, from 4-8 (2-6) to 5-7 (3-5). Though there are quite a few negatives to look back on (Navy, the defense, Minnesota, Doug Mallory, Michigan, the defense again, and the defense a third time), there are certainly some positive takeaways from the season as well.

For starters, the departing seniors gave a lot to this team, setting new records and making the transition from Bill Lynch to Kevin Wilson as painless as it could be, regardless of the pains that came with it anyway. Mitch Ewald, Ted Bolser, Greg Heban, and Stephen Houston, among others, are going to leave behind a different Hoosier program than what existed their first days on campus. The future looks to be bright for this team, and if Darius Latham can be the start of an in-state talent flood, the Hoosiers may not see too many more seasons without a bowl trip.

Another positive is the program doing things not seen in recent Hoosier history. From nearly setting a school record for points in a game against Indiana State, to finally beating Penn State, to comfortably blowing out the Boilers in a game where IU was strongly favored, these Hoosiers did many of the right things, though not enough to produce the 6 wins we so desperately hoped for. Still, doing all of those in the same season is a step in the right direction for a team that doesn't often have them. 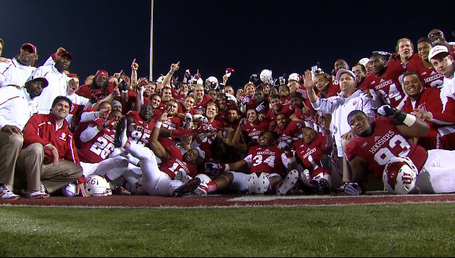 Any season that ends with the Bucket at home can't be all bad. And that's where we are right now. Football season is over. Long live basketball season. Go Hoosiers.

As a post-script to this article, now that writing a Friday motivational for the next day's game isn't a weekly guarantee, I'd like to know what you all want to read on Fridays. Do you want me to answer questions about IU athletics, or muse about something IU related that happened in the past week, or something else entirely? Leave a comment if you'd like, as I really don't know where I want to take this going forward, but I eagerly anticipate your ideas. Thanks. CfB