Because Illinois is a rival, but we don't even have a trophy, so they can only be so important.

Share All sharing options for: The Tertiary Rivalry Motivational

I agonized for a long time last night (assuming you read this on Friday, as I hope you will), trying to figure out what witty form of banter I could throw at Illinois, as I have done with Michigan State, Michigan, a bye week, and Minnesota previously. I came up with the title early on, borrowing a quip from a popular television show to illustrate how much (or little) importance the IU-Illinois rivalry is during football season. Obviously, IU-Illinois has much more importance during basketball season, thanks recently in large part to last year's buzzer beater, Crean's first big win over a ranked team in Assembly Hall two years prior, and Eric Gordon.

I tried to think of how to translate some of this passion to the football field. Would this be a time to make an all-picture article? A couple quick Google searches showed that almost every IU-Illinois picture near the top of the chart was from basketball season, so that option was quickly dismissed. A few other ideas were thrown around, and then I decided it was time to just start writing and see where that took me.

So, here we are. No pithy wordplay, no overly fancy ways of talking, writing, or thinking. And you know why that is? Because Illinois is just not that important right now. Yes, we have to win this game to have even a prayer of becoming bowl eligible. Yes, this is a team we have to keep some focus on to not lose against. But important? No, not really. There's no trophy at stake, which puts them behind any and all games against Purdue, and all football games against Michigan State (I don't care what people say, I like the damn Spittoon. If you read my Michigan State article, you are well aware of this). We just beat them last year, so unlike every Penn State football game until this year, wins against them aren't rare. We play them quite a bit, so it's not like we haven't seen them in a while, as with Minnesota. They aren't a "traditional" Big Ten power, like Michigan, so playing them doesn't automatically imply a big game.

Now, any Illinois fan who comes here and reads this is probably going to flip out that I don't care about them coming to Bloomington, but I'll pose those nice folks a question: If you didn't need to win this game to keep your own bowl dreams alive, would you really care that much about this game? Do you even want to win, considering that keeps Tim Beckman around that much longer?

Perhaps the biggest reason why I just don't see Illinois as important right now is the age-old IU curse: We build up games as being important to the team, the time we'll finally turn the corner, and then we find a way to not win them. Minnesota was another one of those games. Only this time, we were finally going to turn the damn corner. And then... 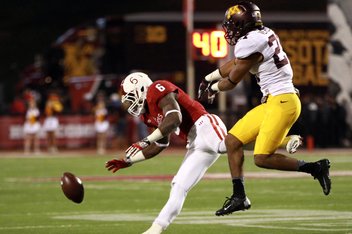 So, why is this game really not important to IU? Because if you don't get your hopes up, it hurts less when they get crushed. And if that isn't reason enough, it's almost #iubb time. Good luck, Hoosiers. Hopefully, you won't need it.