Are you a Hoosiers fan that has been waiting for good news? Have you been looking for something to take your mind off work, or are the Colts/Hoosier football upcoming football games filling you with more dread than anticipation? Well, get ready, because the Hoosier Men's Basketball team offense is going to be a rare treat this year. Not since the days of Calbert Cheaney has there been a team in Cream and Crimson that brings so much experienced firepower into November AND adds key freshmen that could supercharge an already red-hot offense. The best corrollary I can offer is that you should just try to imagine what would have happened if Jared Jeffries had come back for the 2002-2003 season. The essential argument here is that offense has steadily improved under Crean, a lot of experience returns, and in influx of talent should only help.

As I did earlier this summer with the review of the defense, I went back and look through the key statistics in offense since 2006 (Mike Davis' last season). While I essentially stuck to the four factors on defense, here I also threw in the free-throw and three-point percentages, because it graphs nicely: 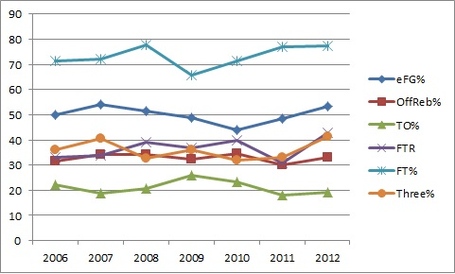 An in-depth discussion IU's past and future offense, below the jump:

The trend lines in this graph over the last four years are pretty straightfoward - turnovers going down, shooting ticking up, offensive rebounding staying about the same. One outlier here is the sudden dip the free-throw-rate too. in 2011, only to bounce to a six-year high last season. With Zeller inside, Oladipo slashing, and the Hoosiers winning, suddenly the Hoosier offense was geared towards drawing fouls, and was getting the respect from the refs, too.

What's interesting over the last six years is that even though the Hoosier offense took a rather large step forward from 2010 to 2011 in-conference per-possession efficiency (from .93 to 1.02 points per possession), they actually took a small step backwards in defensive per-possession efficiency ( from 1.12 to 1.14 points allowed per possession). So, even though the margins were better (by about .07 per possession - that's nothing to sneeze at!), the Hoosiers came away with fewer conference wins in 2011 based largely on 1) this defensive regression, 2) pure bad luck, consisting of injuries at the wrong time, bad bounces, and 3) a youthful inability to finish under pressure. The offense had improved notably in every category listed here from 2010 to 2011 except offensive rebound percentage and the free-throw rate, and notably the effective field goal percentage went up from 43.9% to 48.5% . Here's the stats you're going to like. In 2012:

Even the offensive rebounding percentage ticked back up a little. The only slightly bad news was the turnover rate ticking up a mere 1.2 percentage points, which would be understandable with a freshman leading the scoring (also, Hulls regressed here a bit). When you have such huge jumps in both the free-throw-rate (while continuing to shoot them at a 77+%) and three-point shooting percentages, your offense has clearly improved a lot.

So why did it improve so much last season? Let's take a look at IU's key additions in 2012: Freshmen Cody Zeller, Remy Abell, Austin Etherington, and a healthy Derek Elston. Etherington came in hyped as an outside shooter, but was pretty much a non-factor with less than 5 minutes/game played in about half of the Hoosiers' contests, and those were largely in mop-up minutes. Abell, strikingly, replaced Matt Roth's 2011 line off the bench. 95 points on the season in 267 minutes (Roth had notched 95 points in 230 minutes), with Abell having a few more stops and assists, and (ahem) considerably more turnovers than Roth's 2011 line. Notably, Roth got a few more minutes and shots in 2012, hitting all 15 of his free-throws and 42 of 77 three-point attempts (54.5%!). The "healthy Derek Elston" actually got a few less minutes per game, and surpisingly had slightly lower FG and FT percentages, but boosted his three-point shooting from 17.6% to 55.6%. Don't expect Derek to shoot that well again behind the arc over the course of the 2012-2013 season. And finally, there was Cody Zeller. Zeller wasn't even used as effectively as he could of been, as the Hoosier offense could go long stretches without getting him the ball - there were games that I remember where his only points came off of offensive rebounds and running the floor. And we've already covered how big a difference he was on the defensive side, as an in-conference defensive efficiency improvement of .08 could largely credited to his sole presence in the paint. On offense, CZ was not only the Hoosiers' top scorer, but shot 62.3% from the field, and averaged a clean six free-throw attempts per game, and hit 75.3% of them. Zeller was IU's top offensive rebounder, and of the top six players, only Will Sheehey (who played 332 less minutes than Zeller) turned the ball over less times. And, uh, have you heard that Cody was a freshman? Wow.

So, with all this good news, what are the possible downsides for this season? Well, one - three-point shooting. The Hoosier team shot 41.4% for the season from three , just incredible and not likely to be reproducible. I don't expect a drop from Hulls or Watford, but Matt Roth will be gone, and I do really doubt that Elston will keep being so hot from outside. So, even while I think it likely that IU's 2pt FG% improves, a "regression to the mean" on shooting threes could keep something of roadbump on the increase of the overall eFG%. (I was really intrigued by the drop-off of in three-point shooting from 2002 to 2003 squads from 41% to 34.9%, and did some comparison homework. I won't bore you, but since the Hoosiers are not losing a post presence like they did when Jeffries declared early, I could see this team shooting a "mere" 38.9% from behind the arc this season in something of a worst-case scenario. That would be a regression of 2.5% , statistically significant but not really harmful to the running of the offense). And even though the amount of returning experience should result in fewer turnovers, the freshmen class will probably see quite a few minutes, and this may keep the team turnover percentage from dropping. However, I still do expect the offense to improve, both in-conference and across the board.

Why can we expect the offense to improve further in 2012-2013? Well, the formula to me is that the effective field goal percentage should stay level (an expected increase in 2pt FG% should offset any slight decline in 3pt FG%), and if you add in even small increases in offensive rebound percentages and FTR while keeping the turnover rate steady, this all should boost an elite offense into rarified air. The reasoning for these predictions is that the Hoosiers have essentially five starters back, and add an athletic McDonald's All-American distributor in Yogi Ferrell who is projected to be one of the better shooters among impact freshmen. Christian Watford, Jordan Hulls, Victor Oladipo, and Will Sheehey all came into their own offensively last season, and there's no reason to think their production will drop off without Verdell Jones and Matt Roth. Zeller is now a sophomore, who has put on more strength and should be able to finish around the rim more easily, as well as function more efficiently as the hub of the offense - hopefully improving that 0.75 assist-turnover ratio. And frankly, he should be getting more respect in conference play from the Hightowers, et al, which should be a boost in the Hoosiers' FTR, as well. And people around the league seem to be forgetting that freshman Hanner Mosquera-Parea is the top-rated power forward coming into the Big Ten, and I expect that he should provide a boost to the offense (even in a limited role) through offensive rebounding and be able to finish strong inside. And Jeremy Hollowell seems like a nice replacement for Roth as offense off the bench - he probably won't shoot threes quite as well (who could?) but he should be able to create his own shot, go to the glass, draw fouls, and finish over defenders in a way that Roth never could. And I find it intriguing that that Remy Abell did hit 40% of his threes last season, as well as hitting 78.6% of his free-throws, too. Furthermore, the departing seniors Jones and Roth hit 52 threes on the season - the exact same number that Watford hit, and 20 less than Hulls hit as the Hoosiers' first option at point guard. This is to say, most of the three-point shooting is returning for the Hoosiers, and Sheehey, Abell, and Etherington could probably bear a bigger share of the three-point shots if it's needed - and that's not even suggesting that Oladipo will have improved that particular skill in the offseason. We may actually not even see a significant drop in the outside shooting, and then if Maurice Creek ever gets healthy, well, that's just gravy.

In summation, Coach Crean has a lot of options, and even if the TO% and eFG% stay roughly the same or only show slight improvements, it seems likely that the Hoosiers will continue to boost their offensive rebound and free-throw rates. The Hoosier offense was one of the best in the nation last season, and there is room (and even the likelihood) for improvement. If, as a Hoosier basketball fan, this doesn't get you excited for the coming season - I don't know what will!