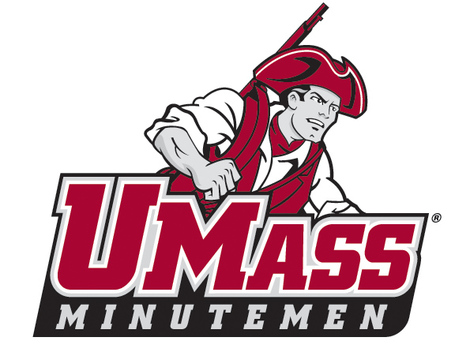 After opening at home against FCS opponent Indiana State, IU heads to the East Coast (the first of two such trips in 2012--Navy in October is the other) to play Massachusetts. The Minutemen are a former FCS program making their debut in FBS this season. They are joining the MAC this year, but will not be eligible for the MAC title or a bowl bid until 2013. The Minuteman come to the top level of college football with a strong FCS/I-AA history. The Minutemen won the I-AA national title in 1998 and were runner-up in 2006.
UMass's transition to FBS is notable in a couple of ways. First, the Minutemen will play their home games in 68,000-seat Gillette Stadium in Foxborough, Mass,. the home of the New England Patriots. (This will be the third consecutive year IU has played in an NFL Stadium, after playing at FedEx Field near Washington in 2010 and Lucas Oil Stadium in 2011). For a MAC school to play in such an enormous stadium isn't unprecedented. Temple, now a football member of the Big East again, plays its home games at Lincoln Financial Field in Philadelphia. Still, that's quite a big stadium for a school whose existing on-campus stadium seats 17,000.
The other, major oddity is that UMass's main campus, in Amherst, is nearly 100 miles away from Foxborough. While it's not unheard of for teams to play off campus, and UConn's stadium is in East Hartford, about 20 miles from Storrs, I can't think of any similar arrangement in college football. It's not at all clear whether the arrangement in Foxborough is temporary, permanent, or indefinite. Regardless, this link says that UMass can play home games in Amherst, in a renovated stadium, no earlier than 2014 and that the license to use Gillette expires in 2017. Playing 100 miles from campus (and at an NFL stadium that is itself 30 miles from the heart of Boston) doesn't seem like a great formula for building a strong following, so it will be interesting to watch UMass over the next few years.
Of course, the long-term fortunes of the UMass football program aren't IU's primary concern. The main issue is whether the Minutemen can become IU's first FBS victim since the 2010 Bucket game. UMass doesn't have an FBS scalp in recent history, but there have been some close calls. UMass was very competitive at Michigan in a 42-37 loss in 2010, lost 21-17 at Kansas State in 2009, and lost 21-20 to Navy in 2006. Two quarterbacks who started games last season, Kellen Pagel and Raymond Pendagast, return. Pagel started 7 games in 2011 and completed 57 percent of his passes and threw 9 TDs and 9 INTs. At running back, the Minutemen look fairly green. Jonathan Hernandez led the way with 1190 yards and 12 TDs, but he is gone. Alan Williams and Jordan Broadnax are the only returning runners who broke the 100 yard mark last season, but both were well below 200. UMass lost its top five receiving yardage leaders from last season. Tight end Rob Branchflower, who caught 18 passes for 208 yards and a touchdown, is the leading returning receiver, and all told, UMass returns 23 receptions, 249 yards, and 2 touchdowns.
On defense, the picture is a bit more clear, with senior LB Perry McIntyre, who had 11 tackles for loss and 6.5 sacks returning, as well as safety Darren Thellen (5 INTs). The Minutemen return their placekicker (Brandon Levegood, 5-7 on field goals) and punter (Jeff Strait--great name for a punter) but generally will be breaking in new returners.
After 2011, the Hoosiers can take no team lightly, but Indiana State and UMass (which went 5-6 in FCS last year) present a good opportunity for a 2-0 start. While I don't expect a Patriots'-level atmosphere at Gillette, the trip should be a good experience for the team, and hopefully will allow IU to get some good experience before the true FBS portion of the schedule begins.