One-class high school basketball in Indiana: will it return? Should it?

Share All sharing options for: One-class high school basketball in Indiana: will it return? Should it?

The four-class IHSAA boys' basketball tournament structure is now 15 years old. Yogi Ferrell, Jeremy Hollowell, and other members of the high school class of 2012 were toddlers when Bloomington North defeated Delta in the final one-class state championship game on March 22, 1997. No current Indiana high school student has any more than a fleeting recollection of an event that was an Indiana institution for 87 years. Most current high school freshmen were born during the 1996-97 school year. Of course, none of that means that this contentious issue has faded from consciousness. During the most recent legislative session, some members of the Indiana General Assembly threatened to get involved in the issue via legislation, and the IHSAA staved off any immediate action by agreeing to conduct a number of town meetings around the state to discuss the state of Indiana high school basketball.

Unquestionably, when IHSAA commissioner Bobby Cox and State Senator Mike Deph visit Milan High School tonight, it will draw more publicity than most of the others. Milan, for those who don't know, is a small town in southeastern Indiana with a tiny high school, but led by Bobby Plump and an anomalous number of college-bound players, the Indians upset Muncie Central in the 1954 championship game. The movie "Hoosiers" was very loosely based on Milan's amazing run to the title. In the 43 tournaments that followed, plenty of small schools made deep tournament runs (Springs Valley in 1958, Tell City in 1961, Cloverdale in 1966, Loogootee in 1970 and 1975, Argos in 1979, Shenandoah in 1981, Southridge in 1985, and Whitko in 1991 advanced to the state finals; many other small schools won surprising sectional or regional championships), but no small school replicated Milan's feat. In the mid-1990s, a majority vote of the principals of Indiana's high schools led to the institution of the four-class setup that continues today.

Let me get one thing out of the way. I wish that the one-class tournament had never been abolished, and I probably would support a return to the single class tournament now, even if it is unlikely to recapture the magic. Still, I abhor some of the rhetoric used by "my side." I don't believe that class basketball has anything to do with an "everyone gets a trophy" mentality, or that it has anything to do with overall societal trends. There are just over 400 IHSAA schools, which means that each enrollment class includes approximately 100 schools. Winning a class tournament championship, being the best of 100 comparably sized schools, is no small accomplishment. It's not remotely analogous to a participation trophy, and it's incredibly disrespectful toward the players and coaches who have won titles in the lower classes.

As a practical matter, I have nothing against class sports. Class sports have worked well in football and have long been favored in nearly every other state. For the most part, schools with enrollments of 400 simply do not have the talent or resources to successfully compete with schools with enrollments of 4,000. Sure, there are and always will be plenty of exceptions, but they are memorable precisely because they are exceptions. Let's not characterize a return to the one-class tournament as move based on fairness. The old tournament was many things, but it was not "fair." Many schools, particularly large high schools in rural parts of the state (I'm looking at you, Richmond and New Castle), essentially had byes to the regional (the round of 64, for you youngsters and non-natives). If I take any pleasure in the current format, it's that schools like that have to pick on schools their own size in the sectional these days.

Nevertheless, however unfair it was to small schools, even if it isn't the sort of format that would make sense to start from scratch today, the significance of the old, one-class Tournament is tough to overstate, and tough to describe to those who aren't old enough to remember it. It was a huge part of the culture of the state, a topic of conversation every March. The Tournament draw, usually held on a Sunday morning, was much-watch TV. While sectional realignment happened from time to time, for the most part, the schools that played each other in the sectional were close to each other geographically and the players and fans had some familiarity with each other. Most importantly, small schools didn't need to win a state championship to build lifelong memories or to grab the attention of the rest of the state. A cinderella run to the regional or the Sweet 16 guaranteed a place in school history in much the same way that a lower class state championship does now, and probably more. Before you dismiss this as revisionist history, here's what Daleville coach Everett Gates had to say after his tiny school won the Anderson sectional in 1985:

I would rather win the Anderson Sectional under Indiana's present system, than win a state championship in class basketball.

Those who supported the conversion from one-class to the current format probably did not anticipate a couple of developments. First, other than when there is a big recruit such as Yogi Ferrell or a Zeller in one of the lower-level games, the 1A, 2A, and 3A games generally are treated like undercards. Even though I myself an a graduate of a small school (low end of 3A), I could probably name every school that has won a 4A title but relatively few of the schools that have won in the lower classes. Small schools that pulled in upset or two in the old Tournament were guaranteed statewide headlines; now that there are small school champions every year, they don't attract much notice. I could have named Loogootee, Argos, and Shenandoah off the top of my head as small schools that made deep runs in the old Tournament, but don't have a clue about who was any good in 2A in 2002, for instance. To the extent that Hoosiers still pay attention to the Tournament, I think the 4A champion is viewed as the "real" state champion.

Second, my guess is that the small school principals who provided the margin of victory for the class basketball proposal were picturing schools such as the aforementioned Loogootee/Argos/Whitko as class champions. They weren't picturing Park Tudor, Guerin Catholic, Fort Wayne Bishop Luers, etc. The last thing I want to do in this post is to take a position on the public/private/charter controversy, but the facts are plain: from 1936 (the first year of the "final four" state finals format) through 1997, only two non-public schools--Hammond Bishop Noll in 1988 and South Bend St. Joseph's in 1989--made it to the state finals. From 1998 to present, non-public schools accounted for 20 of 120 slots in the state finals. That total does not include charter schools such as Bowman Academy from Gary or Indianapolis Metropolitan. Again, my point isn't to debate how such schools should be handled by the IHSAA, but to point out that it's probably different from what proponents imagined.

The question, then, is whether it's possible to bring back the magic. I have no idea. Many critics of the persistence of the one-class advocates take what I will call the "get a life" approach. The crowds are gone, they're gone everywhere, they aren't coming back, and they were declining everywhere. All of those things are true, but it's important not to lose sight of the defining moment in the history of state tournament attendance. Below are attendance figures that I have cobbled together for the purpose of creating a very visually displeasing graph.

Here it is in visual form and in table form. I cobbled the attendance figures together from various sources, and wasn't able to find figures for 2009 or 2010, or for 2012. Unsurprisingly, these numbers are not displayed prominently on the IHSAA website [EDIT (5/14/12): I have received some questions about the source of my attendance figures. By "questions," I mean asking where I found the info, not questioning the accuracy. The answer is that this information is the internet version of hearsay: they came from message board posts that purports to have received the information from the IHSAA): 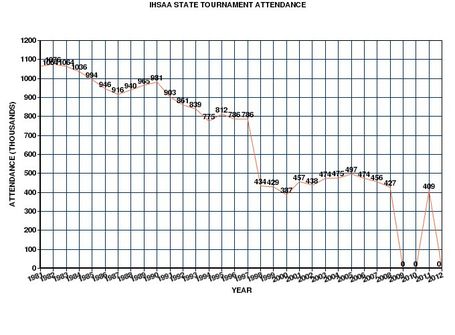 The trends are obvious. Even from 1981 to 1987, attendance was declining steadily. There is no doubt about that. And attendance has plateaued a bit after cratering in 1998. I'm sure that cable TV, multiplexes, the VCR, and so on played a role. But let's not sugarcoat reality. The predominant reason that attendance isn't half of what it was 20 years ago is because of class basketball. That doesn't mean that the old reality can be reconstructed, but the current reality isn't entirely a product of societal trends, either.

So, where does that leave us? Again, the best solution would be to have never made the mistake in the first place. Ultimately, it's not clear that anything is going to come of these town meetings. Tonight, Bobby Plump will give it his heartfelt best, but the IHSAA and its membership aren't going to do a thing, and the General Assembly usually comes around to the idea that it has more important things to do. In all probability the old Tournament is gone for ever. My hope is for a four-year probationary return to the one-class setup, and which point we can get Hoosier inertia and stubbornness back on the side of the angels.