Indiana Soccer at the 2012 College Cup: How good are these guys?

Share All sharing options for: Indiana Soccer at the 2012 College Cup: How good are these guys?

Let's make no bones about it. Indiana has recorded a rare and impressive feat of beating two very good teams on the road to get to the College Cup. Notre Dame possessed the first seed overall, but a legion of Hoosier fans invaded their stadium and made it a friendly one for the Hoosiers. IU took it to the Irish, and were the aggressor on the way to a well-deserved win. The game at UNC was a different story. North Carolina's team was still the defending champions, had a long unbeaten streak at home, and frankly played Indiana quite well, giving themselves multiple chances to win or send the game to OT, at least. But the Tarheels didn't match Indiana's vigor in the first fifteen minutes of the second half, and IU both dominated and capitalized, scoring in the 59th minute at the end of a 5-0 run on shots. It was all the Hoosiers needed to see themselves through to soccer's final four.

Back-to-back road wins in the NCAA tourney are not unheard of, but have been rare at Indiana, and these probably came as a bit of a surprise to the casual observer. The first question I heard about this team last summer was "Are they good enough to possibly win the title?" And more recently, I've heard questions that basically ask "How'd they get to be good enough to be in a position to possibly win the title?" It's a good question: why did this club turn around when it did?

Really, as far as I can tell, there's just two reasons: Jacob Bushe got healthy, and Nikita Kotlov caught fire. On one hand, the slump was a bit of a mirage, for reasons we'll see below, but on the other, an active Kotlov supercharges the Hoosier offense. 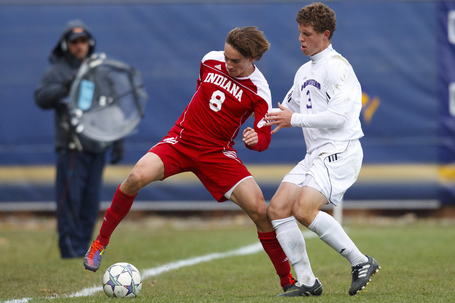 As I wrote from the Big Ten Tourney, Indiana looked like a team just simply without focus or joy in the first half of their BTT game against MSU. You could see that the Hoosiers were organized, well-disciplined, and talented, but were simply being beaten to the ball and Michigan State was just knocking the ball around in quick combination plays. If any of you played youth soccer, you'll remember the 3-on-5 drill where three players are in the middle of a circle, chasing the ball that the five outside players are keeping away from them? Those three players are what IU looked like in the first half.

I hadn't been too worried about the Michigan loss at home, occasionally, there's a let-down game. It's how a team responds that matters. Then came the Michigan State game in East Lansing, and Jacob Bushue went out with an injury in the first half, and the Hoosiers got outshot and lost 3-1. Then there was Northwestern game, where the Wildcats were able to salvage a tie against the Hoosiers with a possible Big Ten championship on the line. I was starting to get worried, and when I saw the Hoosiers getting outpossessed by the Spartans in the BTT, (frankly lucky to only be down just 1-0), I got really concerned. In the second half of the MSU game, Jacob Bushue came back and played for the first time. It wasn't enough, but the Hoosiers rallied somewhat to lose 2-1. Then Indiana got a week off and a couple of pieces of good news:

1) The Hoosiers were awarded a first round-bye in the NCAA tourney, as the top-16 RPI rating came through for a team that had been slumping. It meant a little extra time to regroup and get healthy, and a guaranteed game at home.

2) Michigan, Michigan State, and Northwestern all made the NCAA tournament. It was a validation of the Hoosier losses, and the MSU and NU games became especially understandable when you realize that they were playing without Bushue.

Then came the NCAA tournament first-round game. Nikita Kotlov finally remembered that November is when he shines. He erupted with a hat-trick in the first second-round game, and then scored the first goal at Notre Dame and had the flick-on for Zavaleta's game-winner. With Kotlov making plays and forcing the defense to spread out, space opens up for Zavaleta, which is exactly why Eriq was able to capitalize on a cross to beat the defending champions, North Carolina. How good is Kotlov at the end of seasons? He is second all-time in goals scored in NCAA tournament games. Second behind only Pat Noonan. Let that sink in a bit as you think of all the great championship teams that the Hoosiers have had, and all of the great goal-scorers that went to multiple College Cups, and Kotlov has scored more than all of them. That's amazing.

But what is the value of Bushue? Bushue gives the Hoosiers a ferocious ball-winner on the level of Brandon Ward and Caleb Porter. A nice basketball analogy might be Victor Oladipo. If Bushue's on the field when you're trying to play through the midfield, you're going to find yourself without the ball. You can negate his effect with longballs and counter-attacks, but Konstanki, et all are pretty good at anticipating those and shutting them down.

This is the mirage I was speaking of. Look at the 2012b statistics below, which are the stats for the year sans the games were Bushue was on the sidelines (for at least part of the game) You can see that without those three games, IU looks a much better team at 14-3-2, and this Hoosier teams looks much more like the championship teams of 2003 and 2004. 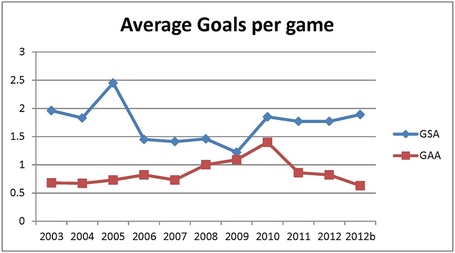 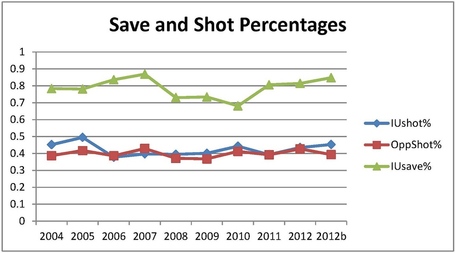 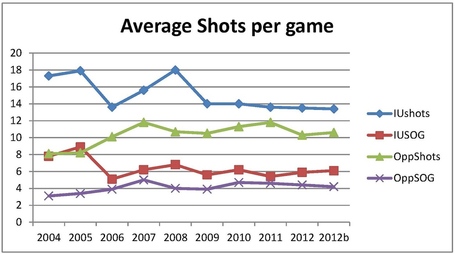 The one area where the Hoosiers are lacking against the best IU teams (from 2004-2005) is shots allowed, including shots-on-goal allowed, but Soffner's superior save percentage is saving them there. In fact, Soffner's worst three game stretch came when Bushue was out, suggesting that Hoosier foes were getting a better quality on those looks in those three games.

The Hoosiers, in games were Bushue was available, are generating goals better than any team except the 2003 and 2005 teams, and allowing fewer goals per game than any team on record here. You have to go back to the phenomenal national runner-up team of 2001 to find a lower Goals Against Average (.43 vs the 2012b rate of .63). The Hoosiers do have a great defense, good enough to win championships. The one asterisk here is that this defense relies on Soffner for its excellence in most games (excluding Notre Dame) more than I find comfortable. The Hoosiers also possess a great offense, one that's good at putting shots on goal and in the back of the net. However, it does so with less volume than even the lesser Championship teams, as 2003 and 2004 were not dominant teams, and yet still generated about 8 shots/game on goal (17 shots/game overall) while these current Hoosiers generate only about 6 on goal and 10 overall per game.

I have to take a quick historical sidebar here, just to say that it was good that the Hoosiers let Mike Freitag go when they did. You can see pretty clearly in the above charts that the Hoosiers were headed in the wrong direction, or at the very least stalled out, on both sides of the ball. Todd Yeagley revitalized the offense when he came in, and the defense has finally caught up as well. The Hoosiers are no longer dominating shot-counts like they used in the Jerry Yeagley (and the early Freitag years), but the trend lines are going in good directions.

Of course, Indiana has had its steady performers all along. Luis Soffner has had another very good year (if he has a good Cup, he could well be playing in the pros next spring), and Caleb Konstanki is the keystone of a solid backline, and of course Eriq Zavaleta has had an extraordinary goal-scoring year. He's likely to draw comparisons to Will Bruin, who's having great success in the MLS, should he also enter the Superdraft as a sophomore.

And then there's AJ Corrado, who has 12 assists, the most since the one-and-done Lee Nguyen had 12 in 2005. Corrado has turned into a steady assist machine, albeit I think more in the manner of Sean Shapert or Wane Lobring rather than Brian Plotkin and Yuri Lavrinenko. If you're an ancient soccer fan like myself, I suppose I wouldn't have to explain it, but Plotkin and Lavrinenko led the Hoosiers to championships by being a sort of classic center-midfielder not unlike Todd Yeagley himself was as a player. In this role, you hold the ball and look for angles to advance the attack with quick passes or combination play, or the occasional long run (like Lavrinenko's memorable game-winner in the 1999 Championship game). Corrado, while a midfielder, is shifted little more forward in the attacking role to be sort of level with Kotlov. He's often getting the ball from Petts or Bushue who have started advancing the attack and he is looking to exploit what the backline of the opposing defense gives him. Corrado's also quite good at serving in set plays from corners or free-kicks, which is handy when you have good headers like Zavaleta and Konstanki on hand.

So, in summary, this Hoosier soccer team is very good when healthy, in a way I didn't realize until I looked at the Bushue-inclusive statistics. How good are these guys? Good enough to win it all.

Will they? My previews of the other College Cup teams and predictions tomorrow. For more reading, do check out Indiana's official program.