Blogs: The Daily Gopher, From the Barn

For the second consecutive season, a strong start to the season by Minnesota has gone up in flames. Hopefully, IU can add to the Gophers' misery when they visit Assembly Hall tonight. Minnesota's season to date has been a roller-coaster. The season seemed to be over in late November when Minnesota's best player, Trevor Mbakwe, suffered a season-ending knee injury, but other than loss to Dayton, the Gophers coasted through the pre-conference. The Big Ten season began with promise, a tough overtime loss at Illinois followed by a close loss at Michigan. Even the 0-2 start didn't seem all that alarming given the quality of the competition. Since then, however, the Gophers have lost at home to Iowa and were blown out at home by Purdue, and now the Gophers have lost 10 consecutive Big Ten games, dating back to February 13, 2011, and 13 of their last 14, and the schedule does not get any kinder, as the Gophers play three of their next four games on the road.

As I noted before the Michigan game, the Wolverines and the Golden Gophers are the only Big Ten teams that IU defeated more than once during the previous three seasons. IU has won two in a row at home against Minnesota, and the Gophers have won at Assembly Hall only 6 times since the building opened in 1971. As would be expected for an 0-4 team, the Gophers tempo free numbers in Big Ten play have been pretty ugly. Minnesota is allowing 1.06 points per possession while scoring only .96. The Gophers are fouling like crazy and aren't getting to the line themselves. The Gophers are shooting poorly 45.2 2P/31.8 3P) and are allowing opponents 39 percent and 50 percent shooting percentages from three and two, respectively. Obviously, that plays into IU's hands to some degree.

That leads into another point, which is that at this point, IU's three point shooting is masking a multitude of flaws. As was discussed here after the Penn State game, while IU's offensive efficiency numbers are among the best in the conference, IU now ranks dead last in defensive efficiency in Big Ten games only. Certainly, the fairly tough Big Ten schedule to date, most notably an unusually strong shooting performance by MSU, and of course last weekend's poor defensive effort against Penn State, are factors here. But there are other problems. After spending the entire non-conference schedule in the black on turnovers, IU is now #8 in conference games with a percentage of 20.1, and 9th in defensive turnover percentage at 17.2. IU is, of course, shooting three pointers at a blistering rate, leading the nation at 47.2. To put that number in perspective, only 19 of 345 Division I teams are over 40 percent. In Big Ten play, IU is even better, shooting 52.3 percent. Yet, IU is now allowing 55 percent shooting from two point range, and even IU's free throw shooting is only seventh in the conference, compared to the mid 70s during the non-conference schedule. This is a good news/bad news proposition, of course: the bad news is that the only thing we are doing particularly well is shooting three pointers. The good news is that IU is 3-1 in the Big Ten and 15-1 overall despite not playing particularly well defensively or in most respects offensively. These problems may not rear their heads in tonight's game against a struggling Gopher squad, but they must be addressed if IU is looking to do more than coast into the NCAA Tournament.

Here are the Gophers' stats, borrowed from their official site because the stats widget on this site is messed up: 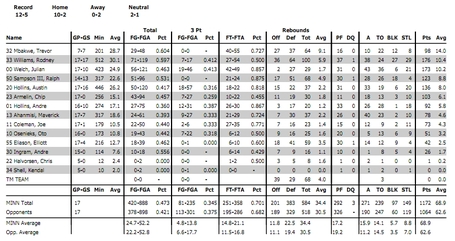 Obviously, no Gopher has truly emerged as the top scorer since the departure of Mbakwe, but the Gophers are getting production from a number of guys. Rodney Williams, the top active scorer and nearly a 60 percent shooter, also leads the team in blocked shots, and Ralph Sampson III is dangerous in that regard as well. Julian Welch and Andre Hollins are Minnesota's most dangerous three point shooters, and Maverick Ahanmisi has seen increased playing time in Big Ten play in the backcourt.

After three consecutive 20-loss seasons, any sort of performance that gets IU to 16-1 is welcome, but I'm getting a little greedy. I want to see IU play better defensively, take care of the ball, return to the disruptive defense that characterized much of the non-conference season, and if IU takes control of the game, I want to see the Hoosiers keep control of it, unlike against Michigan and Penn State. As I said above, it's nice to be 15-1 and be thinking about improvement, but there are ample opportunities for it.