After a nice run under Darrell Dickey in the early 2000s, which included four consecutive New Orleans Bowl appearances from 2001-2004, the Mean Green have won no more than three games per season since 2005.  Under coach Todd Dodge, who was fired last season, UNT won only 8 games total, and four were against Division I neophyte Western Kentucky.  Attempting to rebuild in Denton is former Iowa State coach Dan McCarney.  McCarney did a good job at Iowa State, leading the Cyclones to five bowl appearances in six years from 2000-2005, but was fired after going 4-8 in 2006.  That might sound vaguely familiar to IU fans.  McCarney took 6 years to produce his first winning season in Ames, but is off to an 0-3 start this season, with blowout losses to Florida International, Houston, and Alabama.

Derek Thompson has stepped in as QB and has been medicore.  He is completing 56 percent of his passes and has one TD and an interception.  When I took a look at the Mean Green during the summer, I was terrified of running back Lance Dunbar:

This season, however, Dunbar has been held in check.  He has 53 carries for only 121 yards, a meager 2.6 rushing average.  His struggles against Alabama, against whom he had only 16 yards on 17 carries are understandable.  Still, he is averaging barely 3 yards per carry in the games against FIU and Houston, which seems quite out of character.  Can IU's rushing defense make sure that is troubles continue?   Don't answer that.  As he did last year, however, Dunbar continues to gain yardage as a receiver as well.  He currently is the Mean Green's third-leading receiver, behind Michael Outlaw and Brelan Chancellor.

This game certainly feels a bit like a trap.  North Texas isn't a very good team, but the Mean Green, and particularly Lance Dunbar, haven't played to their potential yet.  Also, this is only the second home game in UNT's new Stadium, Apogee Stadium: 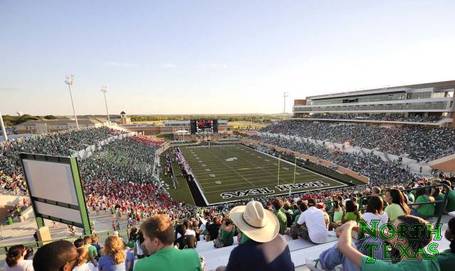 While this isn't the opener, like for IU's roadie to Western Kentucky last year, IU will be the highest profile opponent at home for UNT this year, and I would expect that there will be a full house.  I also have heard rumors of strong IU ticket sales for the Hoosiers' first trip to Texas in a generation.  As I have said before, the 0-2 start probably reduced IU's bowl hopes to best-best-best case scenario, but a 1-3 non-conference record would render such hopes a total fantasy.  IU generally has done a nice job in true non-conference road games against MAC and Sun Belt-level competition, and hopefully that trend will continue.  Indiana 35, North Texas 20.