Share All sharing options for: Conference expansion: Big Ten stability protects IU, while the Big 12's have nots are adrift.

This has been one of the strangest weeks I can recall as a college sports fan.  The landscape of college athletics has changed dramatically.  Of course, there have been other periods of upheaval in college athletics.  In the mid-1980s, the structure of college football hadn't changed all that much in a generation: The Big Ten, ACC, Big 8, Pac-10, SEC, and Southwest Conference had been on the scene and fairly stable for decades, and there was a strong community of major independents: Notre Dame, Miami, Florida State, Penn State, West Virginia, Pitt, etc.  A decade later, the SEC had 12 teams, the Big 8 had become the Big 12, the Big East had become a football conference, and the venerable SWC had disappeared forever.  Television had much to do with this for reasons that I don't have the time or knowledge to address here, but the fragmentation of TV rights led to the consolidation or expansion of some conferences, and left Notre Dame, with its NBA contract beginning in 1991, as the only school with a viable way to remain independent.
All that said, the pace and nature of the change over the last few weeks has been dizzying.  When Nebraska and Colorado bailed on the Big 12 last year, it seemed likely to begin an avalanche of re-affiliation into four super conferences.  But, somehow, that didn't happen.  I thought at the time that the conferences, when standing on the precipice, decided that it's not a no-brainer to go beyond 12 teams.  Getting to 12 teams is a big deal because it allows the creation of a cash cow, the conference championship game.  Going beyond 12 provides no guaranteed revenue bump, and the quality of the teams must be reasonably high for them to make it a revenue-neutral or revenue-positive decision for the current members of the conference.  Still, a few weeks ago, it became clear that Texas A&M was going to leave the Big 12 for the SEC, and from then, there has been a bunch of activity. It appears that Texas, Texas Tech, Oklahoma, and Oklahoma State are set to make the Pac-12 the Pac-16.  Syracuse and Pitt two of the longest-standing members of the Big East (Syracuse was a charter member), have officially accepted invitations to the ACC, and there are all sorts of rumors about other Big East schools jumping to the ACC, either for football or not.
It appears that the Big Ten will be sitting this round out.  On the other hand, if that is not the case, I think we will find out much like the Pitt and Syracuse fans found out that they were ACC-bound--hours before it's official.  Perhaps the most interesting part of the story to watch will be to see what happens to the leftovers.  This is particularly an issue for the remnants of the Big 12.  Assuming that the Pac-12 rumors are true, then that leaves Iowa State, Missouri, Kansas, Kansas State, and Baylor in the Big 12, and leaves Louisville, Cincinnati, Rutgers, South Florida, and new member TCU in the Big East.  The current status of Connecticut and West Virginia is uncertain.  It would seem that UConn is seeking ACC membership and WVU would like to join the SEC.
This already is a meandering post, but it brings to mind a couple of things.  First, IU should feel very fortunate to be in the Big Ten.  As I've said here many times before, I'm not a "conference kumbaya" guy.  Life is too short to root for Purdue in a bowl game or in the NCAA Tournament.  If you can't enjoy Appalachian State beating Michigan, then you might not be alive.  A conference isn't a fraternity; it is an uneasy coalition of schools that need each other but also want to beat each other.  I don't particularly like Michigan or Ohio State, but I'm much happier to be in a conference in which those schools are the heavies than in a conference whether the University of Texas is in charge.  The Big Ten long has taken a generous approach to revenue sharing.  Ohio State and Michigan (and newcomers Penn State and Nebraska) still are richer than the rest of us, but it's a level enough system that even we football have-nots are pretty happy and couldn't possibly get a better deal anywhere else.  Texas, on the other hand, seems to have been sowing the seeds of instability in the Big 12 for as long as it has existed by constantly seeking more for itself.  As I said a few weeks ago in the comments, Texas has seemed to be trying to have the best of both worlds: the security of a conference but the financial strength of an independent.  UT seems to want the insurance coverage but doesn't want to pay the premium.  Love Notre Dame or hate Notre Dame, but ND has the guts to go it alone.  Ohio State and Michigan want a stable conference, so they are willing to pretend that we are all equals.  Texas seems to want both.

If the Big Ten weren't the Big Ten, this could be a very troubling moment for IU.  Let's consider the University of Kansas.  IU and KU are strikingly similar in nearly every way.  Kansas has had much more success than IU in football or basketball over the last decade, but overall their athletic histories are strikingly similar.  Each school has a top-shelf basketball tradition.  Only seven schools have won the NCAA Tournament under more than one coach, and both IU and KU are on that list.  Both schools have been spotty, at best, in football.  Before the Mark Mangino era, Kansas's last Orange Bowl appearance (and still its last conference title) came in 1968.  IU's last Big Ten title and only Rose Bowl appearance came in the 1967 season.  Both schools had nice runs of minor bowl appearances in the 1980s and 1990s, when Glen Mason was at Kansas and Bill Mallory was at IU.  The similarities don't end there.  Both are non-land grant schools in agricultural states.  Lawrence is about the same distance from Kansas City as Bloomington is from Indy.  Both are in very nice towns in surprisingly beautiful parts of states not known for natural beauty.  Even their campuses, both characterized by hills, limestone buildings, and red tile roofs, look strikingly similar. 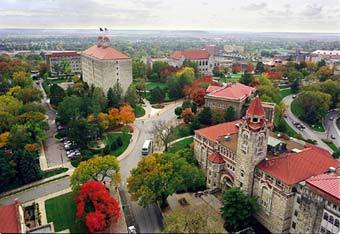 (Looks like a long-lost annex of IU's campus, doesn't it?)  via web.ku.edu

In summary, for all practical purposes, IU and Kansas are twins, except that Kansas has had much more athletic success in the last decade.  Yet, while IU sits fat and happy, counting its Big Ten Network money, Kansas fans are hoping they don't end up in Conference USA.  A good friend of mine is a Kansas grad, and I think he is waffling between a) camping out on Jim Delany's lawn, along with Missouri governor Jay Nixon, and begging the Big Ten to take KU and Mizzou; or b) setting fire to the UT campus.  The downside to the Big Ten's last two expansion moves is that each moved diluted the Big Ten's basketball strength.  Both Penn State and Nebraska are firmly below average.  From a competitive standpoint, if the Big Ten were going to expand, I wouldn't mind seeing two schools who would be good for Big Ten basketball.  On the other hand, in an era when football is king, it strikes me as extremely unlikely that this would be a revenue-positive move and therefore wouldn't happen.
And that's not to say that I want the Big Ten to expand at all.  As I said before, I don't consider the Big Ten to be a fraternity, but to be a good conference I think it's important that schools actually play each other with regularity.  I already don't like the fact that IU won't play Nebraska in football until 2015 (and if the conference expands, maybe longer).  IU won't play in Minnesota's new stadium until its fifth season.  Expanding from 14-16 will increase commonality.  Who will really be happy with the midland additions to the Pac-16?  How will the Arizona schools feel about trips to Stillwater and Lubbock?  How happy will Oklahoma, and even Texas, be with a conference in which the majority of members are two time zones away?  The 1990s reshuffling, while financially necessary, had some geographic coherence to it.  This generation seems like a shortsighted cash grab.
My point?  I'm not sure I have one.  All I can say is that this is very disorienting, but I'm glad that IU is standing on the sidelines and not in the mix...yet.  The Jayhawks provide a troubling reminder of how this could be playing out for IU if the Big Ten didn't have its current philosophy.