Per a news release from the IU athletic department, IU will be changing the design of its football uniforms in 2011.  You can click through for a look, but the changes essentially are: 1) the shoulder stripes are gone; 2) the jersey will not have the odd diagonal stripe on the side of the torso; 3) the facemask on the helmet will be white instead of crimson; 4) the pants will have a traditional dual stripe instead of the odd diagonal stripe 5) the helmet stripes are gone.  Essentially, what IU is doing is undoing all of the changes to the uniform from 2005 to present.  While the fabric will be different, the uniform and helmet design essentially will be what IU wore in 2003 and 2004, the last two years of the Dinardo era, except that these uniforms will have the players' names on the back.  Here's a link to a photo of Matt LoVecchio, IU's starting QB in 2003 and 2004, for reference. One odd omission: there is no indication of whether IU will wear crimson pants or white pants on the road.  The road jersey isn't shown at all.  Perhaps that will be discretionary.

I am slightly disappointed in the changes.  Back in April, I gave a thumbs up to the apparent changes proposed by Adidas, which would have kept the shoulder stripes and helmet design but removed the modern elements on the side of the jersey.  The main criticism of the "early McNeely" uniforms was that they looked like clones of the uniforms of Alabama (2002) or Oklahoma (2003/2004, when "HOOSIERS" was added to the front of the uniforms).  The various changes over the years, particularly the crimson facemasks and dual helmet stripes, distinguished IU from the others a bit.  It's not surprising that Kevin Wilson would like the OU look, of course.  Ironically, the new design is more in line with my tastes than the 2010 uniform or even the April 2011 prototype ( I think the simplicity of Notre Dame's and Penn State's uniforms are ideal).  It's a classic, good-looking uniform, but unfortunately, it's evocative of schools other than IU.

Perhaps Gunner Kiel has been considering Alabama, IU, and Oklahoma because he really likes crimson uniforms, and this move is the last step necessary to seal the deal.  Probably not.

In the final analysis however, I probably should not quibble about these minor redesigns.  It could be worse: 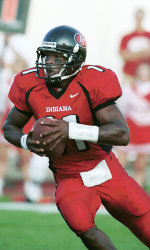