Thumbs up to apparent change in Indiana football uniforms.

Share All sharing options for: Thumbs up to apparent change in Indiana football uniforms.

Last season saw the most significant modification of IU's football uniforms since the major, department-wide color and logo revamp of 2002. To your right, you will see a photo of last year's uniform. Here's what I said last year:

The current verdict? I really, really, like the shoulder stripes, much more than I expected. I think the dual shoulder stripes and the dual helmet stripes look really cool together, particularly from head-on (see the Damarlo Belcher photo in the WKU postgame post). The collar looks fine. Sometimes, design elements that look stupid in a jersey on a hanger or a mannequin look good on a football player wearing shoulder pads, and this is such an instance. My only gripe, and these perhaps look worse than I thought, are the strange diagonal stripes on the sides of the jerseys and the pants. As it is, I consider these uniforms a wash with last year’s. If they eliminated the slash marks on the sides and simply went with solid colors, I would consider the uniforms an upgrade.

Well, an image that appears to be an official release from Adidas has been floating around the web the last few days. Take a look below the fold. 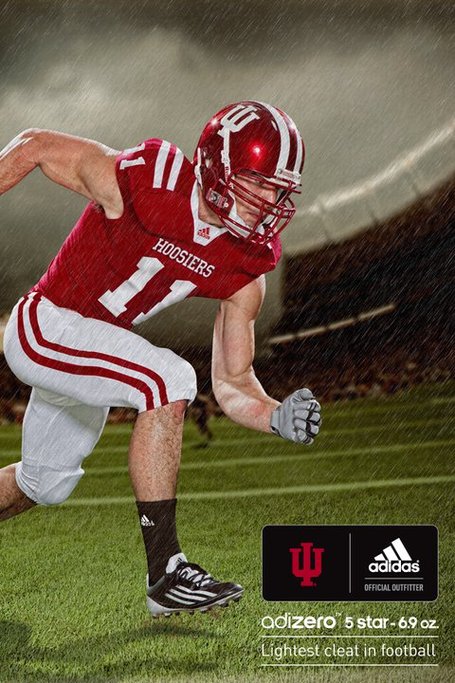 If this is the new IU football uniform, then this is my all-time favorite. As I said last year, I really like the shoulder stripes and had no problem with the collar feature after seeing it in action. My only gripe was the odd "gashes" of color on the sides panels of the jerseys and the pants. Now, it appears that those are gone, and the dual stripe pants of 2002-2009 are back. Also, the "HOOSIERS" on the front of the jersey appears to be smaller. I hope this isn't a false alarm. If this is the uniform that IU will be wearing in 2011, then well done, IU and Adidas.