My apologies, as this was supposed to go up last week, but I wrote it on my lunch break and then left it on this computer. Thus I had no access to it after Wednesday. Sorry for the oversight.

Long have the debates raged over which schools owned which part of the state of Indiana. Hoosiers fans like to claim that the whole state is Hoosier country and the other schools are just living in it. Boilermakers will counter with the fervor for Purdue athletics that you can see in the northwest and the "reversible jacket" Hoosiers that are Notre Dame fans in the fall. Notre Dame fans seem content with their smaller base in Indiana and view their widespread national base as what is truly the beacon of fandom. A couple months ago I attempted to cobble together a map coloring in the boundaries of the state. Where do Hoosiers fans preside? How about the Boilers? Does Notre Dame have a majority fan base in any part of the state outside of St. Joseph County? That’s what I set out to find.

The method was far from scientific, but what I essentially did was poll the free boards of several sites in attempt to gather up varied information from across the state. My personal experience is in dealing with Southern and Central Indiana with no real connection to Southeast or Northern Indiana at all. That is where the Rivals and Scout message boards came into their use. Personal anecdotes helped me fill in a good deal of loyalties county by county. The following picture is what I found. The Gold is solidly Purdue counties, the Crimson for the Hoosiers and the Navy for Notre Dame.

Far from scientific, anecdotal evidence points towards a very murky Northern and Central Indiana with a mixture between Purdue and IU. Notre Dame maintains its stronghold in the far north and I’d imagine that a decent amount of influence spills into Southern Michigan and Chicago. As for the Hoosiers and Boilers strong points? Well those are cut and dry around their respective campuses. It even appears that a little bit of Purdue loyalty spills across the border into Eastern Illinois. In the southeast, Indiana has a majority hold on the state between the schools being discussed but many have told me that more loyalty probably lies with Louisville and Kentucky than with the Hoosiers at times. 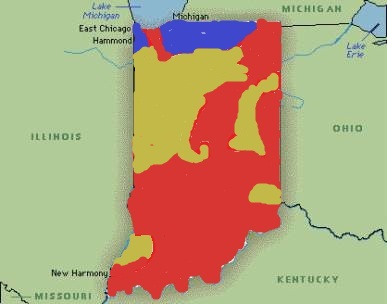 The New York Times did an article recently using a census method to try and discover what parts of the country rooted for who in a college basketball format. Now obviously this isn’t going to be a super thorough census as only about 1570 individuals were polled in the entire state of Indiana but extrapolate the numbers that were gained and it should paint at least a decent picture of who roots for whom. The Hoosiers led the way with geographic scope and had 305 individuals in favor of Indiana football across most of southern and large chunks of central Indiana. 268 cheer on the Boilers over northwest Indiana and pockets of resistance in eastern Indiana. The Fighting Irish come in strong in their secluded geographic region. They have by far the smallest land claim but the strongest loyalties within that boundary with 994 votes. Outside of the big three, Ball State has a great presence in Muncie and the small surrounding area. Kentucky and Louisville have a toe hold in the southwest. Michigan and Ohio State are battling it out where the three borders meet and Illinois is showing pockets of resistance west of Crawfordsville.

In the end what we find in this study is that the borders are ever shifting. The Kentucky schools do have a presence in the southeast, Ohio State in the far east and there are indeed pockets of Purdue resistance in the agricultural land within the heart of Hoosiers country. What does seem to be the most certain about this whole process is that the borders are ever shifting with the ups and downs of the programs. Each school has a strong geographic base but the borders ebb and flow with the rise and fall of success under each program. For a piece of anecdotal evidence, the very southwest tip of Indiana north of Evansville seems to ebb between IU and Purdue every few years. It is an agricultural hotbed but also basketball crazy. The older generations that were around for the Hoosier dominance in the seventies and eighties are considerably pro-IU. The young adults of the 90’s seem to favor Purdue. Early 00’s? The Hoosiers. Last couple of years… Purdue. Right now? It appears to be making a hard shift back to IU. Essentially just like the weather in Indiana, when asked about the sports climate you can get by with saying "If you don’t like it, wait a few hours, it’ll change."