In the category of technically true yet intentionally misleading: 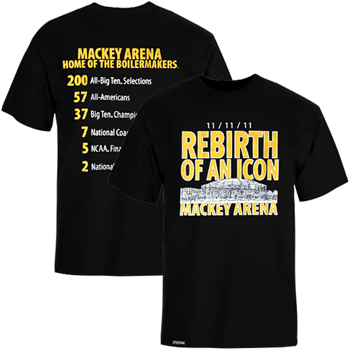 Need a closer look at that back panel? 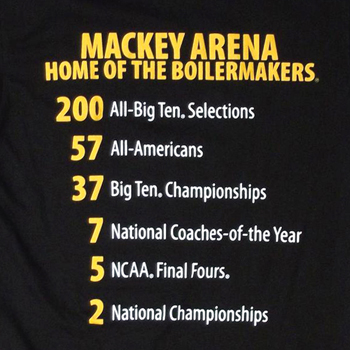 For those of you who aren't following the math, and are wondering when Purdue made all of those Final Four appearances, these are the numbers for Purdue's men's and women's teams combined (Purdue has three Final Four appearances in the 30-year history of the women's Tournament, but only 2 in the 73-year history of the men's Tournament).  Which would make a tiny bit of sense, I guess, if the 11/11/11 game were a double-header.  But a quick Google search shows that the Purdue women don't play their first home game until Sunday, so their presence tonight is only for the purpose of padding the numbers.  Another note: while the shirt speaks in terms of NCAA "Final Fours," note the generic listing of "2 national championships."  I suppose they could have said: "1 NCAA Championship; 1 Mythical Championship Awarded Years After the Fact by a Bunch of Historians Working for a now-Defunct Foundation," but that wouldn't have fit on a T-shirt.

However this might look, I think we have to take our Purdue brethren at their word.  They insist that they aren't remotely covetous of our "dusty old banners" and aren't the least bit insecure about their sparse list of postseason accomplishments.  I mean, what ever could lead us to think otherwise?