Indiana's new football uniforms: thumbs up or thumbs down?

Share All sharing options for: Indiana's new football uniforms: thumbs up or thumbs down?

Now that we have seen the home and away versions of IU’s new football uniforms, what’s the verdict?  Above you can see the current road uniform (unfortunately, the IU-Towson game wasn’t high profile enough for either the AP or Getty to distribute photos, so I don’t have a shot to share of the home uniform).  Below the fold, I’ll compare to the previous version of the IU uniform. 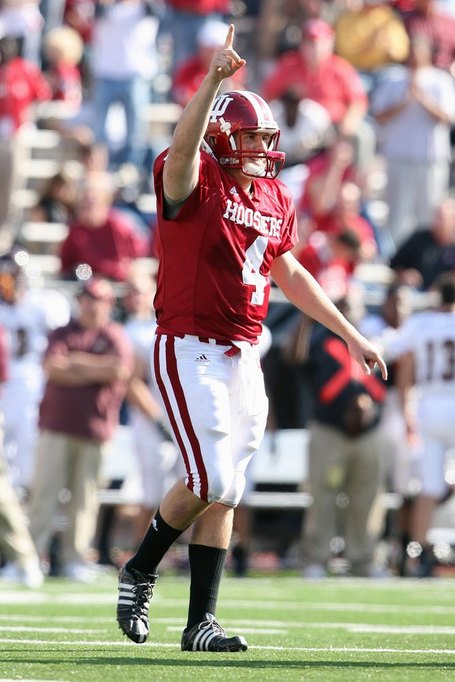 For those who aren’t aware, following the 2001-02 school year, IU engaged in a major revision of colors and logos in an effort to create a uniform (pun intended) identity for IU’s athletic teams. In the 1990s and early 2000s, IU’s teams were a complete mismash.  When I was in school in the mid-1990s, the basketball wore the familar, cherry red uniforms that are pretty similar to what IU wears today.  There was a strange interlock IU logo on the shorts and warmup jackets that was worn by no other IU team.  The football team wore block I helmets and crimson (basically the current shade of crimson) uniforms with black trim.  The stadium markings, the scoreboards, and the field markings were red.  The Marching Hundred wore navy blue uniforms.  The non-revenue sports were even wackier.  The baseball team wore red and wore a block I hat, but it was a "skinny" block I, not at all the same as what was worn by the football team.  The track team wore red and blue with "INDIANA" in a Nike font.  The soccer team wore red with an entirely different font.  Things grew even wackier in 1997, when Cam Cameron introduced black football helmets with an oval IU logo.  The soccer team also adopted that logo.

In the early 2000s, IU hired a strange man, Michael McNeely, as athletic director.  He was mocked for paying a consultant to revamp IU’s identity in 2002, but the money was well-spent.  IU’s colors and the interlock IU logo now are the official and universal colors and logos of the athletic department.

In 2002, then, IU made a major break from the recent past, and even the recently modified uniforms still bear an obvious connection to the 2002 version.  There have been subtle changes.  In 2002, IU wore white facemasks and an interlock IU on the chest.  In 2003, IU removed the interlock IU and added "HOOSIERS" to the chest.  In 2005, Terry Hoeppner’s first year, IU changed the facemasks from white to crimson.  In 2007, IU wore 1967 throwbacks for the Old Oaken Bucket game, including block I helmets with a double stripe.  IU switched back to the interlock IU logo for the Insight Bowl, but the double stripes remained and remain to this day.

Despite these gradual changes, the 2010 uniforms mark the most significant uniform changes since 2002.  Before the season, I gave the new uniforms mixed reviews.  First, I liked that the basics didn’t change: the helmet remained the same.  The fonts on the uniforms, both the numbers and the lettering for "HOOSIERS," remained the same.  No black trim.  No XFL-style fonts.  It could have been worse.  We saw worse from 1997-2001.  Of the changes, I liked the shoulder stripes, and disliked the collar element and the odd striping on the sides of the jerseys and pants.  The current verdict?  I really, really, like the shoulder stripes, much more than I expected.  I think the dual shoulder stripes and the dual helmet stripes look really cool together, particularly from head-on (see the Damarlo Belcher photo in the WKU postgame post).  The collar looks fine.  Sometimes, design elements that look stupid in a jersey on a hanger or a mannequin look good on a football player wearing shoulder pads, and this is such an instance.  My only gripe, and these perhaps look worse than I thought, are the strange diagonal stripes on the sides of the jerseys and the pants.  As it is, I consider these uniforms a wash with last year’s.  If they eliminated the slash marks on the sides and simply went with solid colors, I would consider the uniforms an upgrade.

Well, what do you think?