At about this time last year, I walked in to Memorial Stadium and took some photos of the not-quite-finished North Endzone project.  Work and family obligations prevent me from doing much in-person work for this site, but because last year's post was so well-received and widely-read, and because I was passing through Bloomington recently, I decided to take a look at the current state of the stadium. 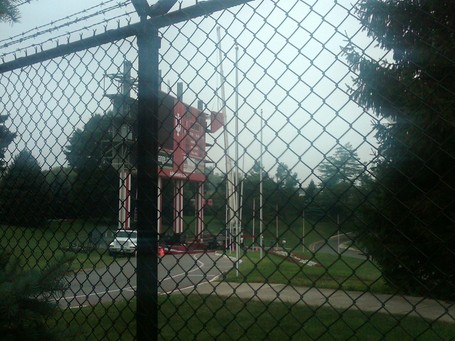 As you can see, the non-essential parts of the scoreboard, pieces that don't cover any electronic equipment, are being removed, which suggests that this will be a replacement or a "gutting," at least.  Here's another view of the current condition of the scoreboard: 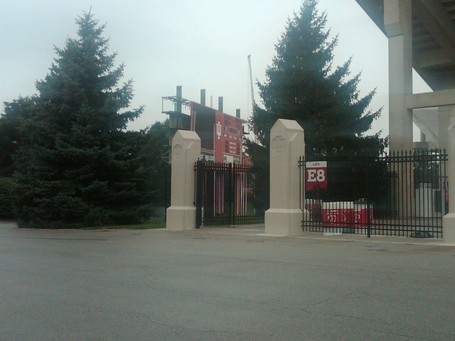 In addition to the scoreboard, this photo shows a really nice feature that was added last fall, after my visit: the wrought-iron-and-limestone (or steel and concrete designed to look like the former) fence that the replaces the old chainlink-and-barbed wire look that used to characterize the east side.  The chain-link remains around the south end zone, as the first photo shows.  Here's another photo: 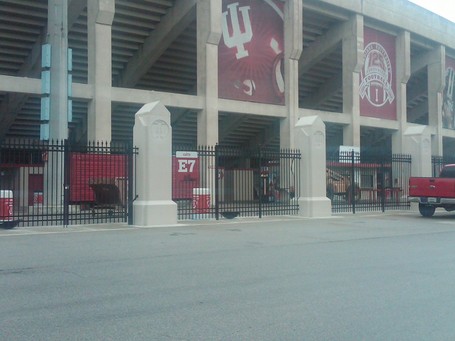 Unfortunately, I failed to capture the "end" of the fence, and I'm not entirely sure how it meets the stadium.  For those who aren't aware or haven't entered the east side of Memorial Stadium in a while, the area between the fence and the concourse, although open air, essentially is part of the stadium.  Memorial Stadium originally was designed to seat 60,000 fans and with an east grandstand identical to the west grandstand.  The west grandstand, of course, has upper-level entryways that are accessed by ramps.  The fenced-in area is the equivalent space to the space covered on the west side by the upper level seating.  In other words, the scaled-back as-built east grandstand needs this space as concourse space.

Also, I did not realize until my recent visit that it is possible to drive most of the way around the north end.  Here is a closer look at the main entrance at the north end, including the brick pavers with the names of various contributors: 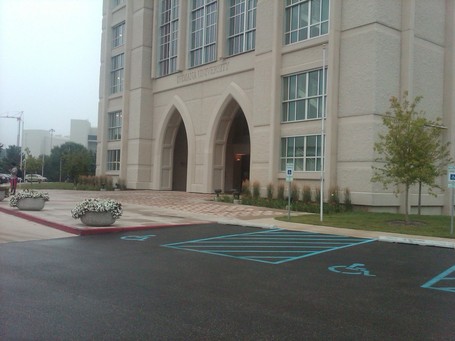 Finally, here is a shot of the side of the addition, which shows how they managed to make the north endzone facility an office building while also keeping the concourse open: 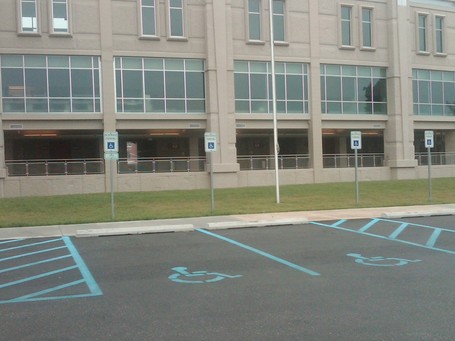 My impression now is the same as last year: this is a first class project, and I hope the dramatic improvement in the appearance and usefulness of Memorial Stadium soon translates to on-field success.