The season that was: Indiana 55, Indiana State 7.

Share All sharing options for: The season that was: Indiana 55, Indiana State 7.

The 2007 season began as it should have, with a whipping of Indiana State, one of the worst teams in Division I-AA. Here's the box score, and here's the blog wrap-up. As I noted last year, a blowout win wasn't necessarily a good sign except as the absence of a bad sign. Also, the ISU game ended an unfortunate run of competitive games against I-AA opponents: Katrina-affected Nicholls State nearly won in Bloomington in 2005 and during Terry Hoeppner's sick leave in 2006, Southern Illinois overcame a significant deficit to win. In 2006, another historically bad ISU team was competitive with Purdue for three quarters or so. It wasn't to be for the Sycamores in 2007, and ultimately ISU fired coach Lou West just 3 weeks into the season.

This game doesn't have much relevance to the 2008 season, so I'm not going to belabor this review, but it's worth noting IU's five quarterback sacks in this game. In many of my early season posts, I questioned whether IU's new-found pass rush was genuine improvement or was merely a reflection of the level of competition. I was skeptical, but IU's transition from one of the worst pass rushing teams in the country to one of the best and Greg Middleton's sudden emergence as one of the best defensive ends in the nation were the Hoosiers' most compelling on-the-field story lines.
Of course, given the expected easy win, off-the-field story lines dominated the early part of that evening. The ISU game was IU's first game since the death of Terry Hoeppner in June 2007. IU honored Coach Hep and his family in an emotional pregame ceremony. 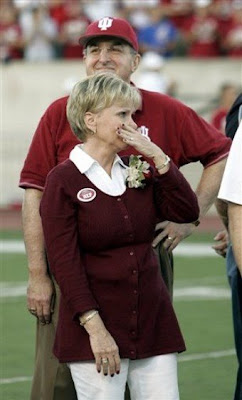 If this game is remembered for any on-the-field moment, it's for the most justifiable unsportsmanlike conduct penalty in IU history: James Hardy, after scoring his first of two touchdowns, holding the ball to the sky in tribute to his former coach. 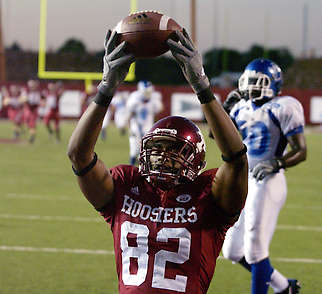