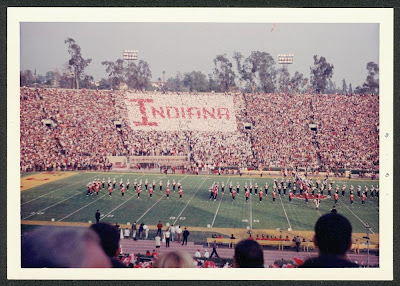 John Pont, the coach who led IU to its only (or, as I prefer to call it, first) Rose Bowl appearance, died today at age 80. Pont went 31-51 in eight years in Bloomington. He followed up the 9-2 1967 season with a 6-4 record in 1968 (those were IU's only winning seasons between 1958 and Lee Corso's Holiday Bowl champs of 1979). In 1969, IU began the season 4-3, but as Maryann Wynkoop's "Dissent in the Heartland" documents (p. 132 if the link doesn't take you directly there), a disagreement between Pont and African-American players ultimately led to a walkout, and Pont's program never recovered. After his departure from IU following the 1972 season, he coached Northwestern for five years.