Much of the talk in recent days has concerned what IU can and cannot do pursuant the terms of Kelvin Sampson's employment contract. Of particular concern has been Jim O'Brien's successful suit against Ohio State. The trial court ruled and the appellate court affirmed that Ohio State's firing of O'Brien for cause was a breach of the contract. It's worth considering the similarities and differences between O'Brien's circumstances and Sampson's circumstances. Nothing I say below should be considered a statement of fact or an irrefutable legal opinion. These things are hotly contested, often for years.


Sorry if you will have to click on these images to read them, but I'm not typing them in. 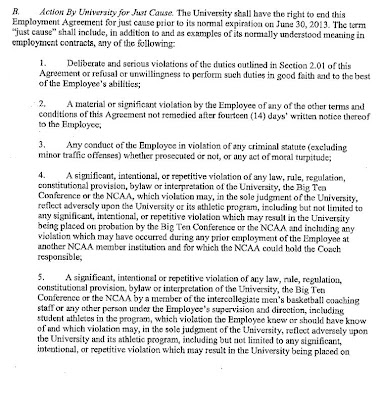 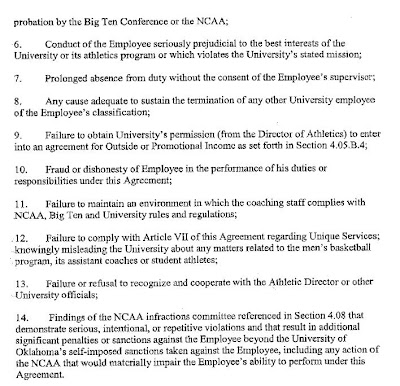 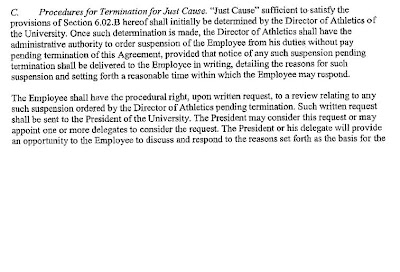 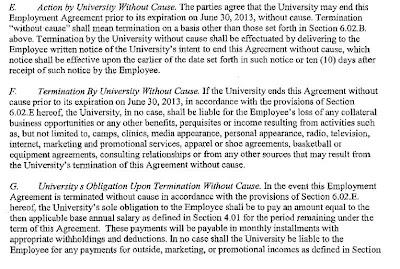 As you can see, the first two images above contain the definition of just cause, the third image shows the procedure for termination for just cause, and the final image discusses termination without cause.
O'Brien's contract

Here are the relevant terms of O'Brien's contract, taken from the September 20, 2007 opinion of the Court of Appeals of Ohio. This does not appear to be a reported opinion, but the Westlaw citation for O'Brien v. Ohio State Univ. is 2007 WL 2729077 and the cause number is 06AP946.

5.2 Termination Other Than For Cause/Partial Liquidated Damages. If Coach's employment hereunder is terminated by Ohio State other than for cause (as delineated in Section 5.1 above), Ohio State shall pay and provide to Coach, as partial liquidated damages * * * (i) the full amount of Coach's then-current base salary (see Section 3.0 above) and (ii) such normal employee benefits as Ohio State then provides generally to its administrative and professional employees * * *.

5.3 Termination Other than for Cause/Additional Liquidated Damages. If Coach's employment is terminated other than for cause (as delineated in Section 5.1 above), in addition to the liquidated damages to be paid and provided by Ohio State pursuant to Section 5.2 above, Ohio State shall compensate Coach for the loss of collateral business opportunities (whether media, public relations, camps, clinics, apparel or similar contracts, sponsorships or any other supplemental or collateral compensation or benefit of any kind) by paying Coach as additional liquidated damages * * *[.]
b. an amount equal to three and a half (3.5) times the product of (y) the Coach's then current base salary * * * and (z) the number of years remaining under the term of this agreement * * *, if Coach's employment is terminated after June 30, 2003. Such amount shall be paid in a lump sum within thirty (30) days after termination of Coach's employment hereunder, and shall be in lieu of any other obligation of Ohio State * * *.

Not surprisingly, a contract negotiated by a coach after a Final Four appearance looks a bit different from a contract negotiated by a coach under NCAA investigation. Now, the Ohio appellate opinion is 23 pages long, so any effort to quickly summarize it may be lacking. But as you can tell, the "for cause" provisions of the two contracts are quite different. Ohio State got in to trouble because they tried to fire O'Brien under paragraph 5.1(a), for materially breaching the contract by doing what OSU perceived to be an NCAA violation. But the second part of that paragraph, 5.2(b), states that O'Brien could be fired upon an NCAA finding of lack of institutional control or NCAA sanctions. Courts generally disfavor contractual interpretations that render parts of the contract meaningless, and allowing OSU to fire O'Brien because of OSU's own belief that an NCAA violation had occurred would render 5.2(b) meaningless. And of course, OSU couldn't have fired O'Brien in June 2004 based on 5.2(b) because the NCAA had not even investigated yet.
Sampson's contract does contain provisions that allow IU to terminate Sampson for cause on the basis of NCAA violations. But Sampson's contract does not explicitly require a finding by the NCAA that a violation has occurred. The contract speaks of a violation "which may result in the University being placed on probation...." It certainly seems that there is no requirement that IU wait until the NCAA hands down its punishment. If IU were to act before the NCAA's ruling, would the university have a leg to stand on? It sure appears so. Airtight? I haven't done enough research to know, and there's really no such thing, at least when it comes to preventing litigation. But clearly, the relevant provisions of Sampson's contract are different from O'Brien's contract. The O'Brien contract explicitly required that the university allow the process to play out before firing O'Brien for cause. The Sampson contract contains no such explicit requirement. I'm sure this is one of the issues that IU is exploring, and IU's attorneys have much more to work with than did OSU's attorneys.
Finally, paragraph C above, the third image, contains IU's procedures for termination for just cause. Many of us have wondered why IU is allowing Greenspan to take part in this process. The simple answer may be that however much confidence the president and trustees have in Greenspan, they don't want to do anything that runs afoul of the specific procedure described in the contract. The contract says that the AD performs the investigation, so the AD is performing the investigation.
As an aside, even though it's not terribly relevant, I have included the "without cause" provisions of both contracts. O'Brien's buyout was much more generous. IU would owe only base salary, while OSU also owed for loss of outside income.