Share All sharing options for: Big Ten Week at SMQ.

The astonishingly comprehensive Sunday Morning Quarterback broke down the Big Ten last week (Hat tip: There is no Name on my Jersey). Not much Hoosier content outside the predictions, in which he predicts the Hoosiers will finish 9th. In a nutshell, lots of returning offensive skill position guys, but a defense that was so awful last year that it would still qualify as "bad" even with moderate improvement. For those who haven't read SMQ, take a look. I would love to read all of this blog every day, but I would have to quit my job. It's a tremendous resource, and at the very least, the Big Ten Week content is worth a look for any fan of the conference.

Also, SMQ gathered a bunch of Youtube links to various Big Ten games. Unfortunately, the only IU game he found was the 1993 Independence Bowl. Watch the first video until you see Thomas Lewis streak down the sideline for a long TD reception. After that...well, if you weren't following the Hoosiers in 1993, take a look at the highlights from the last minute of the first half so that you will know exactly when the Mallory era ended, even if it did nominally continue through 1996. If you were following the Hoosiers in 1993, don't bother: if you are like me, that horrific sequence is irrevocably etched in your mind.

As SMQ said, where are the Anthony Thompson videos? I know there are some of you out there with tapes of the 1987 Michigan win (Bo burned his copy)... 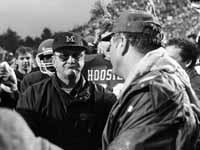 ...or the "darkest day in Ohio State History" (IU's 31-10 win at the Horseshoe that cost Earle Bruce his job) out there somewhere. How about some Youtube?